Here’s something you don’t hear about much: Victorian Chicago had a lot of murderers and murder victims named Thomas Walsh. Stranger still, more than one of these stories takes place right about on the sight of a modern Jewel Grocery store. 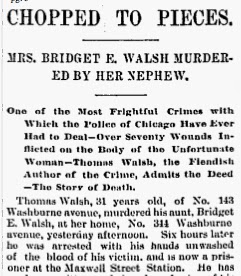 In 1882 a Thomas Walsh flogged his wife to death (he was sentenced to thirty-five years, with the judge making remarks about a long, lingering death instead of a quick one on the gallows).  In 1883, a Thomas Walsh got into a political argument that turned violent on Kinzie between Des Plaines and Halsted (where the Jewel is now) and got his head bashed in on a telegraph pole. In 1914 a Thomas Walsh was murdered and robbed of his Civil War pension money in Wheaton.  In the 1920s, a labor leader named Thomas Walsh was arrested for murder.

But the most gruesome of the Thomas Walsh murder stories is one from 1892. This one is so gruesome that I’ll immediately post something lighter after this, because I don’t want something this grim to be the first thing people see on my page, especially now that we’ve transitioned over from the old Chicago Unbelievable blog to Mysterious Chicago! I promise that in a few hours there’ll be a nice post with monkey and zoo animals in it.

In May, 1892, Thomas Walsh was brought to Maxwell Street Station, where he wrote a confession claiming that he murdered his aunt, Bridget Walsh, at her home on Washburne Avenue (after renumbering and name changes, this would probably be right about in the footprint of where the Jewel grocery store at Ashland and Roosevelt is now).  Murders happened all the time, but this one was most of the most gruesome in Chicago history.

“The victim,” wrote the Tribune, “was chopped to pieces, and then the mangled remains were subjected to such shocking mutilation as would put an Apache Indian to the blush. No less than seventy woulds were found on the unfortunate woman’s body, and when it was carried into the county morgue, Superintendent Roene…dropped his lantern on the damp floor of the dead-house and stood aghast.”

The house in which she was killed was tidy, for the most part, with a kettle still boiling on the stove when police arrived, led by her distraught husband. But as Sgt. Kennedy made his initial investigation, he slipped in what turned out to be half an inch of blood on the flood, then opened the blinds to see that there was blood everywhere – bloody handprints were all over the walls. The ceilings were splattered with stains. Mrs. Walsh’s body was found beneath a pile of clothes, alongside a knife and a pair of scissors. The condition of the body was given in graphic detail in the papers, but repeating it would be too gruesome even for me; suffice it to say that a broom handle being driven through the body is about the least of it.

Enough witnesses had seen Tom Walsh in the area that he was very quickly arrested in his home, which was right near Holy Family cathedral.  The nabbed him walking past Throop Street and dragged him to a nearby light. Tom was a known ruffian and knew both officers from several previous incidents.

“Oh, never mind,” said Tom with a laugh. “I thought you referred to something else.”

But his shirt was soaked with blood. His hands were “red with human gore.”

The Maxwell Street police station was well known for its aggressive interrogation techniques, but according to the papers, Walsh calmly admitted that he’d killed his uncle’s wife while he washed up in the matron’s room.  Here is the confession he made, as reprinted in the Trib:

I went up to Mike (Walsh)’s house quite early in the afternoon and found Bridget in the house alone. We staid (sic) there a long time. I got drunk. Then I made some remark and Bridget got mad at it and started for the little bedroom next to the kitchen. I got up and followed her, and made some more remarks that seemed to anger her much more, and she suddenly struck me in the face with her fist. A minute later she hit me again harder than the first time, and then I got raving mad. I ran back to the kitchen table, grabbed a knife that was lying there, chased her back into the corner of the bedroom, and commenced to stab her. I stabbed her lots of times in the face, and neck, and arms, and stomach, but it didn’t take long, because in fifteen minutes after I commenced I was all through. She didn’t scream much, but I kept right on cutting with all the strength I had. I don’t know how many times I drove the knife into her, but I guess it must have been a good many times….I did it all myself and no one knew about it but me.”

An inquest later found 115 wounds in the body. Thomas Walsh was found insane and sent to the asylum.