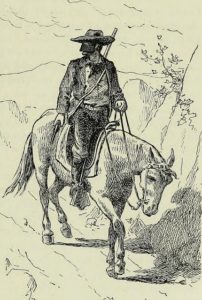 In late November of 1892, wild rumors spread about a mysterious  “highwayman,” a masked robber who rode a dark horse with a blazing red leather saddle, and who had been terrifying Lake View, on the north side of Chicago. The Tribune described him as “either a maniac or a desperado.” Lake View and Lincoln Park became police states as dozens of officers were put on call to catch the crook, and stories began to circulate that the costumed crook had supernatural powers.

Children on the north side spoke in whispers that The Highwayman had been heard riding though Graceland Cemetery at midnight, the hoofs clacking over the tombstones as he rode atop them. Another said that he’d been seen on horseback jumping off a bridge and riding the horse right through the filthy Chicago River.

And his fame wasn’t limited to Chicago. The story of the Lakeview Highwayman was retold in papers all over the country, and a few questioned how such a city could be trusted to hold a World’s Fair the next year.

Where was Batman when we needed him?

Seldom has there been an example of how much a little flair for the dramatic can turn a story into a sensation. In reality, the Highwayman’s deeds were pretty low-key. If he hadn’t been wearing the mask, he would have been little more than a simple b-rate robber. But dress up like the Dread Pirate Roberts in a bowler hat and get yourself a dark horse with a white star on its forehead, and you become a supervillain!

The drama began on November 23rd, 1892, when a man in Lake View was approached by a masked rider who wore a mask covering his eye. Above it was a stiff derby hat, and below it a sandy mustache. The “highwayman” ordered him to set all his money on the ground and go away. This same instance was repeated several times all over the north side over the course of the rest of the day, concluding with a daring chase in which a cop took control of a bakery cart and chased the Highwayman a mile through the north side, firing a few shots in the process. He struck at North and Clybourn, at Clark and Lawrence, and at several saloons. However, his net profits were estimated to be in the range of $5.35

The next day, dozens of officers were brought in and armed citizens patrolled the streets, interrogated pretty much anyone they saw riding a horse, but the robberies continued and the rider eluded capture.

After two nights, a mustached man dropped a horse off at a stable, saying he’d be back in an hour. When the was was never called for, the stable owner notified the cops, who were able to confirm that the horse was the one that Highwayman had used. But there was no trace of the Highwayman.

What was generally agreed was that this was no professional robber; the “highway robbery” techniques he used were the sort of thing you saw far more often in dime novels than in real life.  The Highwayman would approach a person and “Got any money? Throw it on the ground,” threatening to shoot if they disobeyed . He’d wait until they’d run far away before picking up whatever they’d tossed.

On November 27, a masked Highwayman with a long rifle (or a pistol in each hand, depending on the witness) was seen in Winnetka and Highland Park in the north burbs, riding towards Evanston. Police went on his trail, but didn’t think it was the SAME highwayman; this one had a black mustache. Apparently, the tales of derring-do had begun to inspire imitators (the one in the north burbs turned out to be a troubled young student from Highland Park who was only out for kicks). One credible rumor was that the criminal was a student who’d promised to put on a mask and rob everyone he saw for four days if Benjamin Harrison lost the election to Grover Cleveland (which he did).  Another masked highwayman – possibly the REAL Lake View Highwayman – robbed of man of 6 bucks in west suburban Riverside the same day, and then repeated the deed the next day in Berwyn, Cicero, and other southwest suburbs, putting the area on high alert.

On the 28th, The Highwayman showed a bit of his true colors when a grocer / undertaker in Aurora was approached by him. THe grocery/undertaker brandished a whip and told the Highwayman to “Shoot and be goldarned,” which was all it took to get him to flee.

The Lake View Highwayman apparently returned to Chicago on November 29th, striking in Avondale, but by this time he was losing his ability to inspire fear: the story of the grocer made the news all over the midwest. On November 30th, a man scared him away from a hold-up on Elston Avenue with a toy pistol.

Then, as suddenly as he came, the Lake View Highwayman simply vanished from the news. Sightings ceased in early December, and papers forgot all about him. In the summer of 1893 there was a only small item stating that the police had arrested a horse thief named James Dustin who was suspecting of being the Highwayman; he had a bunch of masks and fake mustaches in his possession. Several of the Highwayman’s victims were brought to the station, but none were certain that Dustin was the man. He had, after all, been wearing a mask.

As near as I can tell, this blog post is the first thing written about him since 1893. National news for a week, then forgotten for over a century.

I can’t resist ending with the most basic line of them all: Who was that masked man?