You know what I say, folks: there’s no such thing as good ghost evidence, only cool ghost evidence. Well, here’s a cool one for you. This was taken on one of my tours this past weekend, and shows what looks like a baby on the staircase at Hull House: 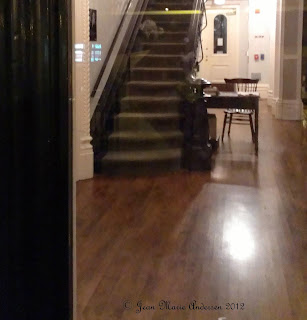 A close-up, with the contrast adjusted very slightly: 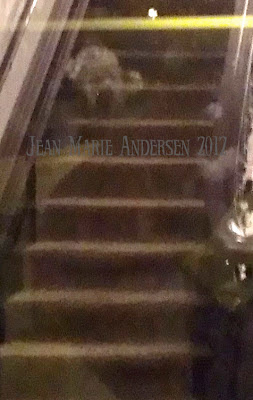 My first instinct when she showed it to me was to look for an ad at the bottom of the screen – usually, when someone shows me a picture that seems this clear, it turns out to be one of those “ghost capture” iphone apps that insert ghostly images into photos. It’s always a bit of a dilemma for me, because you can’t go around accusing your customers of fraud or anything, but the most logical explanation when you see one of those “too good to be true” ghost pictures is to assume that someone is trying to trick me.  However,  none of the “ghost apps” I have include a baby quite like this one, and I’ve no reason to think that the photographer, Jean Marie Andersen, was faking it. She seemed genuinely surprised by the shot; I think her friends noticed it before she did.
And it’s not TOTALLY clear – there’s a big missing chunk where the mouth and chin ought to be, and that won’t usually be the case with fakes. Beyond that missing bit, though, it seems very well proportioned; our brains are wired to see faces in random noise (one usually uses the words “matrixing” and “simulacra” here), but one’s brain sure doesn’t have to put in much effort to make one see a baby’s face – and possibly arms and body – in this one.
So, COULD it be fake, or COULD it just be a light or smear on the window that happens to look a lot like a baby? Well, sure! That’s ghost hunting for you; there’s a MILLION possible explanations. That’s why I always refer to things like this as “weird shit,” not “paranormal activity.” But in several years of taking people to Hull House, I’ve never seen another light or smear look so baby-like. Since this one was taken I’ve tried to figure out a place where you could stand that would get  a street light to reflect on this spot, but I can’t reproduce anything like this yet.
Now, there was at least one baby who died at Hull House – Jane Addams wrote about how upset the neighbors were when they found that they planned to have a newborn abandoned baby who died in the nursery buried by the state, not with a proper religious funeral, a case in which they misjudged the culture of the neighborhood and lost some trust with the neighbors for a while. That would have been about 1898. However, it was in the building next door (where the garden is now), and I think that baby was younger than the one in the picture above appears to be. If a baby died inside the house, it would be news to me (though not a surprise).
What do YOU think? Just a trick of the light? A real ghost? I often mention the baby story here, and of course this time of year there are 2-3 busloads of people hearing about the “devil baby of hull house” rumor from 99 years ago nightly. Have our brainwaves MADE a ghost on the spot?

For much more on the devil baby and Hull House: