In 1860, just after the election, President-elect Abraham Lincoln came to Chicago, where he’d been a regular visitor for years, to meet Hannibal Hamlin, his running mate, for the first time. They met up at the Tremont House, the hotel at Dearborn and Lake where, a couple of years before, Lincoln had made a version of his “house divided” speech from the balcony. Now, a public reception was held for well-wishers to greet the president elect at the same hotel.

But perhaps the most momentous event of that Chicago stop was the day the party met at “Lake View,” the mansion of Judge Ebenezer Peck, and had a long discussion about who would be in Lincoln’s cabinet. Here’s the mansion: 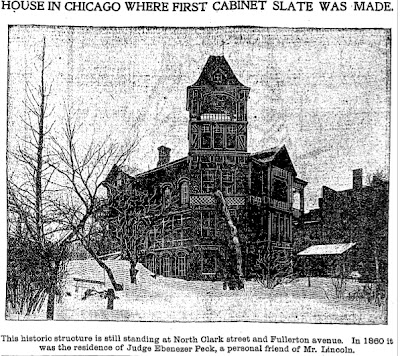 The house stood at the northeast corner of Clark and Fullerton. It survived the fire, being just a couple of blocks north of where it ended, and was still there as of the early 20th century, but seems to have been torn down some time before 1920. When it was built, it stood on seven acres, through Judge Peck’s daughter noted in 1900 that it was now surrounded by so many buildings that it would be hard to see from the road; this would put it around the spot where the fullerton plaza hotel stood as of 1923.

“They had hardly become seated in the parlor,” Peck’s daughter recalled, “before a curious crowd gathered before the low windows, which reached to the floor. Mr. Lincoln was greatly upset by the people peering at him. He never could beat to keep people waiting…to get out of the difficulty Mr. Lincoln and Mr. Hamlin went to a bedroom in the southeast part of the house on the second floor and there they secured at last a chance for uninterrupted conversation. They were together many hours, and there the first cast of the Cabinet was made up.”

Peck’s daughter saw Lincoln off and on in Washington, where her father moved during Lincoln’s term to be a judge in the U.S. Claims court. One particular night, she said he saw Lincoln at the White House, where he found him walking up and down in the deepest agony, lit by a single gas jet. “This is Friday, hangman’s day,” he said. “I had to sign the death warrants by which five poor boys were shot today.” He paced about, saying “Shoot a farmer’s boy for going to sleep!”  He remarked that the generals said these executions were necessary for military discipline, but “he had and idea that it was a good thing for military discipline to have his own way once in a while about shooting farmer boys for going to sleep.”

I believe that this is as close as Lincoln ever was to what is now Lincoln Park; he probably would have passed by it on Clark en route to Peck house. In 1860, the tower window would have quite likely given you a  view of the green area that would soon bear Lincoln’s name, but which was, at the time, the  City Cemetery. It’s tempting to imagine Lincoln standing in the tower, looking out at the graves and contemplating the Civil War that was looming ahead of him.