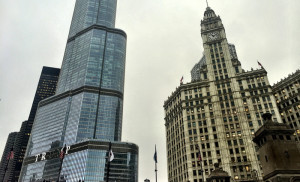 If you look closely at the clock on top of the Wrigley Building, you’ll noticed that it doesn’t have numbers. Some say that the symbols are all the letter W, but if they are it’s in a rather abstract, just-close-enough-for-tour-guides-to-say-so sort of way. It’s as subtle an ad for chewing gum as can possibly exist.

And on April 4, 1920, Al Chase of the Tribune enthused that Mr. Wrigley wasn’t going to make more of a statement – against all expectations, since Wrigley was known for his huge chewing gum ads in Times Square. The new skyscraper was expected to become the tallest, most visible building in Chicago, and the advertising space would have been awfully lucrative.

“Pretty nearly every one of us,” wrote Chase, “has paid our nickels and worked our jaws towards financing what will be Chicago’s tallest building – to loom 398 feet above the plaza at the north end of the new Michigan Boulevard bridge.  The strangest feature of this great cloud-tickling monument to spearmint is that, although it will be on the most commanding site in the middle west for a wonderful electric display for the virtues of William Wrigley Jr’s chicle sticks, there won’t be an advertisement on the building.

“When one realizes that Mr. Wrigley pays a good fraction of a million dollars annually just to let the mazdas flash the fame of his gum to Times Square passersby in Manhattan, his modesty and restraint in keeping snaky electric advertisements from luring the eye of the boulevarder in Chicago to his magnificent building is something to commend.

“This $3,000,000 structure, which Mr. Wrigley is striving to make the finest office building in the world, will have a simple brass plate at the main entrance on the plaza, with merely the words ‘Wrigley building.'”

Just pointing this out to Mr. Wrigley’s neighbor, Mr. Trump. That’s all.