Updated July 2012:   Anton LaVey, founder of the Church of Satan, claimed to have been born on the spot where the Hancock Building now stands. If true, it would probably the only thing he ever said that wasn’t straight up nonsense.

LaVey was always far more of a showman than a religious figure. At various times he claimed to have been a church organist, a lion tamer, a gypsy, and any number of other things that turned out to have no basis in fact. He freely and cheerfully admitted that he lied like crazy – he was said to claim that he’d “be full of shit if I didn’t keep my mouth shut and my bowels open.”

So, what of his claim that he was born where the Hancock building now stands?

We can dig up a few things about the plot of land where the Hancock stands. In 1928, it (or part of it) was occupied by The Casino Club – the club is still there, but in a slightly different location, having moved to the northeast corner of the block when the land of the original site (on the same block) was sold out from under them to residential real estate company. It now stands in the shadow of the Hancock, the only other structure on the block today. As of 1928, that club was THE place for the high society set to gather. Being a black building with an unlisted phone number and no sign on the door, I imagine it still is, though the exploits of the club are no longer a regular feature of the newspaper (as they were back in the 1920s).

Here’s the fire insurance map from a few years after his birth. The vast majority of the space where the Hancock was built is occupied by a parking lot, though the upper corner of the the 4 flats in the lower right may have overlapped a little. The little house next to the four flats is probably a bit south of the Hancock’s footprint.

The important thing is that there’s no hospital here, or any place a baby would be born other than the houses. Babies were still sometimes born in houses in 1930, after all. The houses there at least give the claims a shred of hope.

But other records pretty well obliterate it.

Unfortunately for LaVey’s claims, the 1930 census records have his parents living at 7340 N. Ridge Blvd in Ward 50, which is in the area around Western and Touhy, near Evanston. This would put him in Rogers Park – not anywhere close to the Magnificent Mile. HIs dad’s occupation is listed as “sales manager” for a soap company. You sometimes see things saying his father was a liquor dealer. This would have been illegal at the time, though he almost MUST have been doing some bootlegging on the side to live like this – if the records are correct, they did live in a pretty swanky place. The rent on the apartment was $125 a month – a massive sum at the time.

(click for larger image – the name is spelled “Levy” not “Levey,” as his family normal spelled it, but this kind of mistake isn’t unusual, and Michael is listed as born in Omaha, as LaVey’s father is usually said to have been. The census lists residents as of April 1, 1930, ten days before Howard/Anton’s birth).

The building now at 7340-50 N Ridge, where they lived according to the census, is known as the Casa Bonita apartments. The stunning u-shaped complex was built in 1928-29 and still stands, with a courtyard full of statues and a reflecting pool. More pictures are on A Chicago Sojourn and Chicago Mag’s Deal Estate (which has some gorgeous indoor views and a video). I would have loved it if some of the design echoed the design from the Demon Bank on Clark. 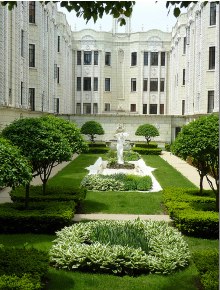 The place even has an indoor pool that is referred to as historic (though I’m not sure it was there yet in 1930).  A delightful 1963 “pool rules” sign is worth a look! 2 bedroom condos here are remarkably affordable for Chicago (in the 200 range, from what I can tell), but amenities are high.

4 thoughts on “Anton LaVey, the Hancock Building, and Casa Bonita”