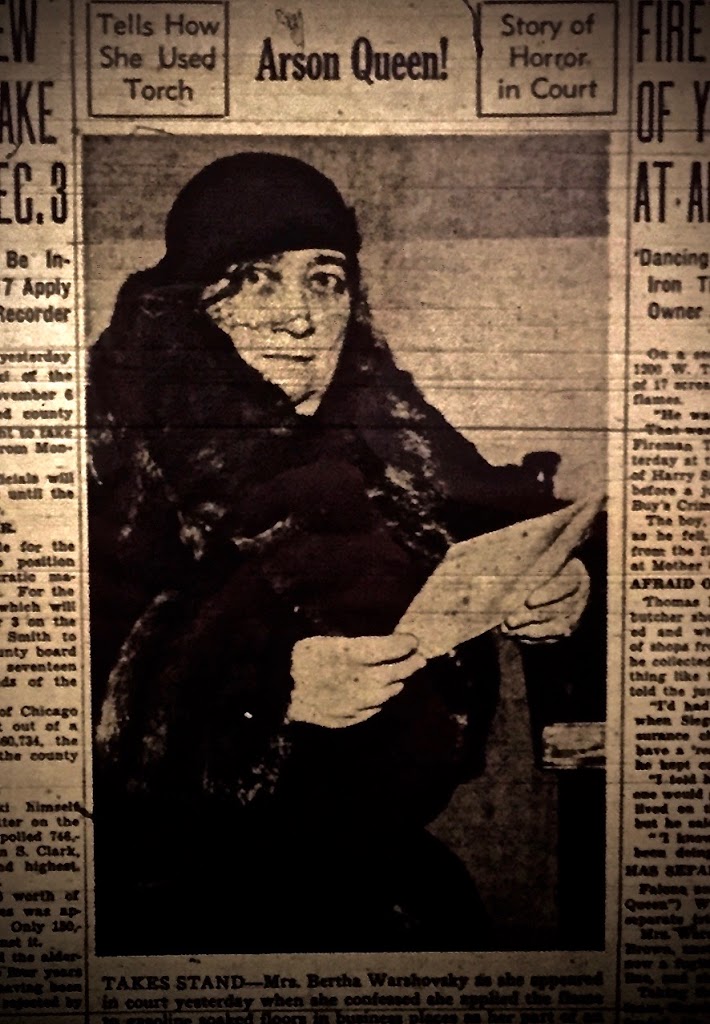 On November 7th, I’ll be conducting a Mysterious Chicago walking tour of the “Darker side” of Taylor Street for Atlas Obscura. Here’s one of the stories I’ll be covering!

As a grandmother in her sixties, Bertha Warshovsky assumed that no one would ever suspect her if a building burned down. We can imagine that she didn’t always look as threatening as she does here, in the best photo I’ve found of her so far. We’ll go ahead and say it was probably a badly scanned version of a badly-taken photo, shall we?

Having invented a sort of fuse that would enable her to light a match and get safely away before a fire really caught, she made a whole career out of helping people who wanted to burn buildings down for the insurance money. By the 1930s, police were calling her “The Arson Queen.”

One of her fires in 1928 had a particular hiccup – a handicapped 17 year old was still in the building when she set the fire, and lost his life. Bertha took the stand in the resulting case, and it was covered in a November, 1934 issue of the Tribune. In a pattern you see in a lot of cases like this, the papers often complained that attractive woman were treated so well by the courts that they were almost always acquitted (or at least given much lighter sentences than a man would get for the same crime; we never hanged a woman here), but were only too happy to pile unpleasant language on the female defendants they found less attractive. Consider that a trigger warning for what follows.

“Mrs. Warchovsky,” the paper wrote, “a short, dumpy woman told how she ‘touched off’ the fire on Aug 11, 1928. She seemed surprised when Prosecutors Kearney and Nash did not seem to understand some of her firebug phrases. She used gestures most of the time to demonstrate her testimony.”

Warchovsky said she’d charged the owner of the house her usual fee – $170 – to set the fire at Taylor and Racine (earlier articles indicate taht the owner collected about $11,200 in insurance money).   “Yes,” she said. “Harry Brown called me on the telephone and told me that I should come over, that there was going to be a fire there. I took a cab and went right over. We started right in to make balls.”

“What do you mean?” asked the lawyer.

“Balls, paper balls like this (she demonstrated with gesturing). We were supposed to make the fire that day, but when we got the layout fixed up we couldn’t make the fire because some people were sitting outside.”

The next day, Bertha took another cab over and found that the place was ready to burn except for a lack of gasoline. While one man got the gas ready, Bertha touched up the wick, a process she described in court: “First, I lighted a cigar, and blew like this (blowing) to make the flame red. Then I tied it inside of a bunch of safety matches. The cigar sets off the matches and the matches start the wick to burning and then pretty soon the gasoline paper balls go up and then comes the real fire.”

Several days before, the Tribune had stated that the “dumpy little grandmother” had confessed to at least a dozen such fires. In describing her, the paper said “The ‘queen’ is of Henry VIII proportions on an abridged scaled. The chair into which she was wedged elevated her rotund shins so that her feet swung clear, while her 225 pounds of royalty clamped the throne immovably to its proper place on the floor. …Most of the ‘touch-offs’ were her own work, she admitted, because a woman would be less likely to arouse suspicion.

Prosecutors were asking the death penalty for the owner of the building, though not for Bertha, who presumably didn’t know that the house was occupied. She still would have probably been on trial for murder, but got a severance in exchange for turning state’s evidence.  She seems to have had a regular career as a witness in arson trials after this, stating at one point that she’d started more fires than she could remember.

My research on her is still at an early state; I’ve browsed the Tribune archives but haven’t really checked the defunct papers or the legal archives for the kind of info that hides in there (including perhaps a better photo). I’m not even really sure how the trial described above came out yet. But I wanted to put up the article to plug my upcoming Taylor Street Tour, which will talk about her and several other stories that have been on this blog. See ya there, and GO CUBS!

i Thurs, Mar 26, 11am
Rosehill Cemetery (via airbnb experiences)