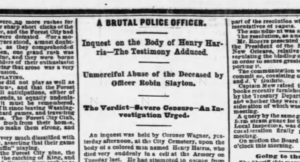 As many of you know, I’ve spent the past winter (2018-19) working on a new  “Who’s Who” book for Graceland Cemetery. Given the tens of thousands of burials there, finding all of the most interesting stories can be a real challenge. Sometimes I’ll just go through the interment books – books listing the name, age, address, and cause of death of each interment. One day I tried to find the youngest person whose cause of death was “Old Age” (it was a 62 year old man).

One day early in the research, one particular cause of death from 1867 jumped out at me: “Over-exertion and brutality of policeman.”  The name was Henry Harris. “Over exertion” seemed to have been written in later.

Harris’s story made the news; accounts in the Chicago Tribune and Chicago Republican differ a bit, but from them we can find that Harris was a black man (a fact not mentioned in the interment book, which typically didn’t keep track of ethnicity) who had come to Chicago from North Carolina five years earlier. Though there were free black men with his last name in North Carolina, it’s likely that he came to town as an escaping slave.

By 1867 he was a free man, working as a whitewasher or a cook (depending on which paper you’re reading), but possibly still jumpy around authorities. In July of that year, he was in a Monroe Street building, variously described as a “swindling den” and a fortune-telling establishment, when the police knocked on the door. Though not suspected of any crime, Henry jumped out a window and made a run for it.  The Tribune suggested that “Probably he had once been taken in hand by and officer, or he may have seen a drunken man arrested, which would easily account for his reluctance to be dealt with again.”

But as the same paper said, “There is nothing which arouses the indignation of the a policeman so much as to see a man running. Police detest the exercise themselves, and they seldom fail to punish others for indulging in it.” Officer Reuben Slayton gave chase, simply because someone was running. When he caught up to Harris, Harris was, by Slayton’s own admission, cooperative, but Slayton began beating him about the head. Though he initially said “I struck him only once,” he then added “I kicked at the prisoner with the side of my foot…in the pit of the knee. I think I slapped him also in the face. He went straight along; he offered no resistance.”  Other witnesses described Slayton being considerably rougher, and confirmed that Harris was cooperative, begging to the officer not to hurt him and “professing great fatigue.”

Harris, who in one account was having his fortune told prior to his wedding, which was a week away, died in a holding cell at the Armory that night; a coroner determined that he’d died from the underlying cause of heart disease, though Harris’s beat-down had possibly been a factor. The coroner’s jury called Slayton’s actions “cruel, unmanly and uncalled for.”

The Tribune was enraged, and said that a man such as Slayton belonged on the police force no more than a burglar belonged on the Supreme Court. As a result, Slayton was given a thirty day suspension before returning to the force, where he remained for another twenty years. He was the officer who arrested Adolph Fischer after the Haymarket incident.

Henry Harris is buried in an unmarked grave in the grassy section near the Eternal Silence statue.