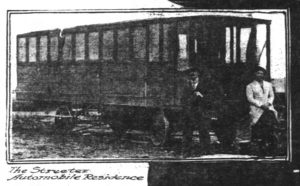 The legend of Captain George Wellington Streeter is well known – in 1886 he ran his houseboat ashore at Superior Street, then started charging people to dump their garbage around his boat, eventually creating the 186 acre landfill we still call “Streeterville” and embarking on a 30 year war with the city over the ownership of it, finally losing The Battle of Garbage Hill in 1918.

The truth is a bit more complicated – Streeter claimed squatting rights on a landfill and kept up his claim for years using fraud, trickery, and occasionally violence. But here in Chicago we sort of love our villains, and today there is a life-size statue of Streeter at Grand and McClurg. I think we love his sheer audacity – the general silliness of the story covers up just how big of a scoundrel he really was.

A case in point is a story I ran into in the newspaper archives lately – in part of the process of fighting for his squatter’s rights, he may have invented the automobile “mobile home.”

It was 1910, and Streeter was temporarily expelled from the property. According to an issue of Straus Investors magazine from 1918, Cap “bought an ancient chassis which mounted a delapidated engine, and on this he built a curious frame structure like a box car.”

For a while the “land boat” was “anchored” near the loop, but one night in September, 1910, after having a small party, he drove it to a theater. When the play was over, the craft was gone, and Cap found it had been moved up to Chestnut Street – right in his old “deestrict.” He and Mrs. Streeter climbed in and simply went to sleep.

The next morning a cop told them to move, and Streeter, according to the Inter Ocean, informed him that “he owned the land as well as the landboat,” then proceeded to talk the officer’s ear off for two hours explaining why the land was rightly his. The cop referred the matter to his superiors, who couldn’t think of a good reason to make the house move. There was no regulation against parking a “house automobile” on the street and simply living there at the time. 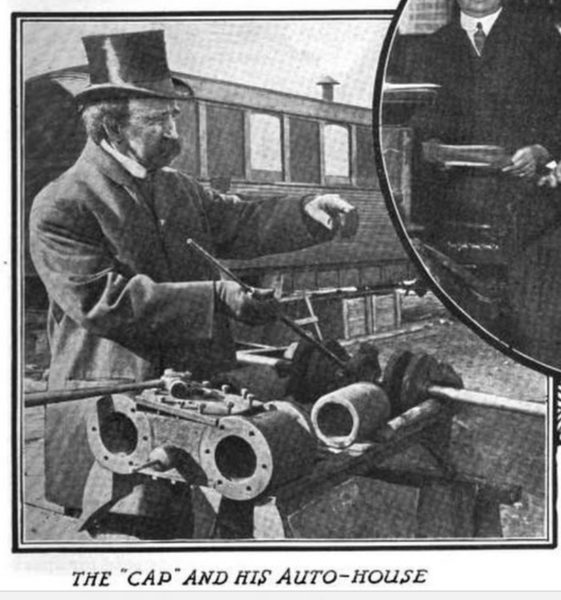 Indeed, they’d probably never seen a “house automobile” before. Though mobile homes – in form of things like covered wagons – had been around for centuries, I couldn’t find a reference to an earlier automobile mobile home than this, and I don’t think they started being manufactured until the mid 1920s. He might not have been the first to do so, but in 1910, if you wanted a horseless mobile home, you had to invent your own.

Cap told the Inter-Ocean that the invention was a good one. “The landboat is running fine,” he said. “My wife and I are going to make a trip in her overland to California this winter.”

This California trip was not to be. According to the 1918 Straus magazine retelling, “when he finally started it the curious vehicle plunged and bucked along for a couple of hundred yards and then got stuck deep in the sand. The motor died and the “Cap” never was able to start it.”