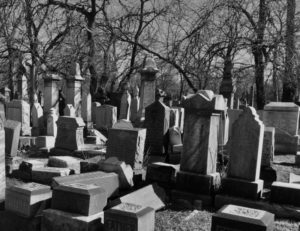 Sextons – cemetery managers – have the best stories. Seriously. Get next to one of them at a party some time and get them talking. You wouldn’t THINK so many interesting things would happen in a cemetery, but believe me, they do. And cemetery managers in 1897 were no different when asked about what sort of weird stuff they ran across.

A lot inspector at Rosehill said there was one custom he noticed frequently, but didn’t understand: at some burials, the chief mourners would take away handfuls of dirt in handkerchiefs, then return in a couple of weeks to add it to the grave. “It is,” he said, “in all probabilty on account of some superstitious notion, but I have never been able to find out just what it is.” Modern access to Google books makes it easier for me to look this up than it was for him (except that he could have just asked someone), but in a quick check I can’t find the answer here, either, though there are lots of good superstitions regarding graveyard dirt (my favorite being that if you had a kid who ate dirt, feeding them some graveyard dirt would cure them).

At Graceland, it was said they’d recently observed an old woman wandering among the grounds, asking employees for an open grave. When asked why, she held up a piece of paper on which she’d written the words “typhoid fever,” and said, “You see, sir, if I take that and drop it into an open grave and it is buried the disease will leave the body of my little grandchild.” The worker helped her find a grave and let her drop the paper in. A theme you see in a lot of stories like this – such as digging up the bodies of tuberculosis patients to burn the heart and stop them from sucking the life out of living family members – is that sometimes the people involved didn’t even really believe in the superstition. These were acts born of sheer desperation.

On the other side of town, Jane Addams of Hull House once wrote about speaking with woman who entertained superstitions about wearing red in cemeteries.  Further south still, down at Oak Woods Cemetery, there was another ritual that puzzled the workers. On the night after a burial, they would often find lage numbers of candles just inside the gates – the candles had apparently been lighted, extinguished and once, then dropped into the cemetery.  They suspected it was “a voodoo charm or superstition that is popular among some classes of negroes.” Books on what we would have then called “negro superstion” were plentiful back in the day, but I can’t find a superstion exactly matching this, though there are some similar things in a book called Folk Beliefs of the Southern Negro (note: it would be fair to call this text “problematic” at the very least, by today’s standards). There were several references in the 19th century press to black graves being covered with broken crockery, medicine bottles, and toys, but practitioners could only explain that the custom was “old fashion.” An 1893 article in the Tribune thoughtfully notes that “the great mass of negroes are too intelligent to believe in such things, and they are doing a great deal, as they have done, to stamp out such foolish beliefs.”

Other officials talked about people saving the silver name plate from coffins and taking them home (and returning to ask about re-attaching it to the now buried coffin within a few months nine times out of ten). Mount Greenwood officials had a story of a man burying three fingers he’d lost at a Pullman sawmill in their own tiny coffin, and of a man burying a leg he’d lost (it was dug up and reburied with him when he died).

Another article from the 1903 Jackson City Patriot brings up an interesting point about city cemeteries: while the loneliness involved in being a gravedigger in the country (where one digger might be the only one working in a cemetery for years) could breed “strange notions and beliefs,” the ity gravediggers’ better access to company kept them from getting superstitious. “In Chicago,” a reporter wrote, ” many of the gravediggers are men with no imagination and unable to understand or appreciate any of the traditions connected with graveyards. Solitude has no chance to weave its spell among them, because the Chicago cemetery is surrounded by the bustling busy city.” A Rose Hill official was quoted confirming that a superstitous grave digger wouldn’t last long. “There are none of the conditions prevailing here to breed fears and phantoms,” he said. “It is simply business all the way through.”

This lack of superstition extended beyond cemetery workers – there are several 1930s references to a club in Chicago who would meet every Friday the 13th to smash mirrors, rent rooms on the 13th floor of hotels, walk under ladders, etc.

But, then again, we do have that story about the billy goat….