In 1922, people didn’t bring scientific gadgets on ghost hunts – they brought guns. In October of that year, there were wild reports of a ghost in the near north side – it was heard unleashing blood-curdling shrieks and laughs, and the area was plagued by a sound likened to “padded bricks dropping onto coffins.”

The neighbors and police came out in full force, armed to the teeth, as seen in this photo: 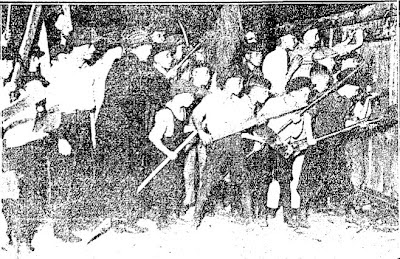 THe whole ghost hunt was quite a fiasco – the crowd hunting for ghosts in the neighborhood was estimated to number as high as 2000. A psychic on the scene said, “I see three men, one with a black beard. And I see two women – one of them handsome. There is a knife. There will be trouble. I can solve this mystery.”
There was trouble all right – one policeman emptied his gun into what appeared to be a shadow.  A woman who lived in the house around which it all centered was sent to a mental ward in a family feud as to the origins of the ghost.  The two thousand people lurking around with weapons probably did an awful lot of damage to property in the area.
Eventually the electric company laid the sounds to short-circuiting wires, though the explanation didn’t satisfy everyone.
(Visited 78 times, 1 visits today)