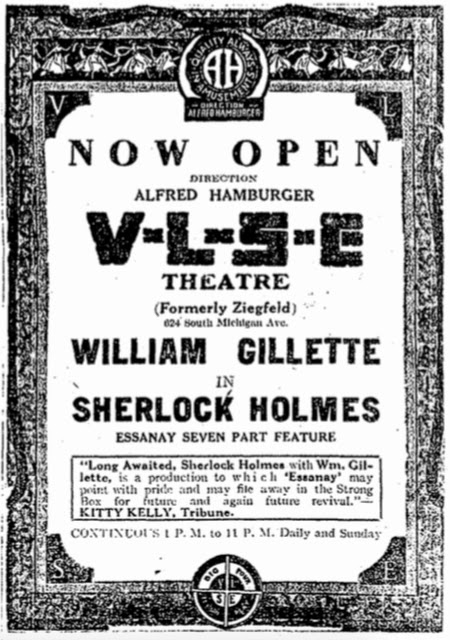 As some of you know, this spring I’ll have new book out on silent film production in Chicago. Co-written with Michael Glover Smith, Flickering Empire will be published by Wallflower, the film studies imprint of Columbia University Press.

In the draft, we talk a bit about the Sherlock Holmes film that Chicago’s Essanay studios made in 1916, towards the end of their period of relevance.  It was one of the film hits of the year; William Gillette had worked with Arthur Conan Doyle on a theatrical script about Holmes in 1899, and had spent the previous decade and a half traveling the world starring in it. He’d had several offers to adapt it to a silent film, but turned all of them down until George Spoor of Essanay made him an offer he couldn’t refuse. Offhand, I’m not sure what the offer was, but a few contemporary articles say that Gillette made an unprecedented sum on the film, and that the seven-part picture was so expensive to make that only a couple of movies had ever cost more to make. One 1916 article notes that actual 1890s London cabs were brought in for the production. A Richmond paper noted that part of what made Gillette pick Spoor was that he was able to find parts of Chicago that looked just like the worst parts of London needed for the filming; Spoor had recently declared that Chicago was the perfect town for movie-making and determined to shoot every foot of his films there (though he had experimented with California before – 1916 was just about the end of Chicago’s time as a major film hub)

The movie was a hit; reviewers loved it and called it “a sensation.” They were especially taken with Gillette himself. 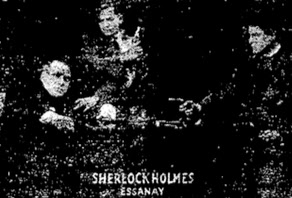 We spend some time in the book lamenting that the film is now lost, like 99% of Essanay’s other output (and like the vast majority of silent films in general). However, as I always say when talking about lost films, they’re always finding long-lost films in barns and yard sales, so you never know.

And sure enough, at the 11th hour before we finalized the book, Sherlock Holmes has been found. There was a print in a vault in France, and the film has now been remastered.  Unfortunately, I doubt we’ll be able to see it in time to write much more about it in the book. No Chicago screening has yet been scheduled; it will make its US premiere in San Fransisco next year. It first played in Chicago 98 years ago at the VLSE theatre on the 600 block of South Michigan Avenue, and was in a few other theatres throughout that summer before vanishing from the city.  I hope it makes it here soon; I’ll be fascinated to see if any of the Chicago locations are still recognizable today (which is a real treasure hunt with any Chicago-made films that we can find today).

You can read the whole story of the film’s rediscovery at the Cinematheque Francais in this article in Variety.

You can also hear Mike and I exploring the remains of Essanay Studios on our 2011 podcast, “Inside Charlie Chaplin’s Vault” . Click the link or simply listen in below: