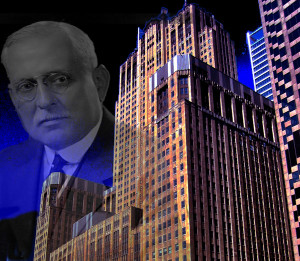 There’s a scene in Citizen Kane when Kane is celebrating his wedding to his new bride, Susan Alexander, whom he’s promised to make into an opera star. “Charlie says if I can’t (sing at the Met) he’ll build me an opera house!” Ssuan squeal. “That won’t be necessary,” Kane laughs. From there, the film immediately cuts to a headline: “Kane Builds Opera House.” She proceeds to flop.

The story gets repeated on a lot of Chicago architecture tours – lots of them claim that utilities kingpin Samuel Insull built the Civic Opera House so that his wife, rejected in New York, would have a place to sing. It’s frequently said  that Insull built it to look like an armchair with its back facing east so he could figuratively turn his back on the big apple out of spite.

Many tour guides will quickly say that this is a myth – Mrs Insull would have been 60 years old in 1929, hardly an ingenue (in some versions of the story he built it for his daughter or girlfriend, though he had no daughters). I’d long assumed that the story was just the result of some tour guide who’d seen Citizen Kane a few too many times. After all, wasn’t it pretty well known that the Susan Alexander part of the plot was based on William Randolph Hearst pushing Marion Davies’ film career?

But on digging in a bit, I found more than meets the eye here – Orson Welles did say that there really was a millionare who built an opera house for the “soprano of his choice,” and that the character of Kane was partly based on Insull (particularly visually; if you look at the cover of Time that Insull graced you can see a certain resemblance to Charles Foster Kane). He apparently denied that Insull’s wife was the soprano, but co-writer Hermnan Mankiewicz did apparently say the the next scene in the movie, in which a reviewer passes out drunk after writing one line of a review calling that soprano “pretty, but hopelessly incompetent,” was based on his own experience reviewing Insull’s wife on stage. In this version of the story, Mrs. Insull appeared on Broadway, and Mankiewicz was outraged to see an old woman playing a teenager in a “production bought for her like a trinket,” in biographer Richard Merryman’s terms.  Herman wrote just one line, calling her “an aging, hopelessly incompetent amateur,” before passing out. This was the incident that worked its way into the screenplay.  Hollywood historian Maurice Zolotow, who worked on the Times at the time, told Pauline Kael that Mankiewicz did in fact pass out from a mixture of booze and rage while trying to write a review of Mrs. Insull’s stage skills about four years before the Civic Opera House went up.

Welles and Mankiewicz may have been stretching the facts here a bit if they said the passing-out scene happened just as it does in the movie, but that wouldn’t be out of character for Orson. There’s a delightful scene in Richard Linklater’s Me and Orson Welles in which his assistant describes one of Orson’s stories as “according to Orson, which means it probably isn’t true, but it ought to be.” There is certainly SOME truth behind the story, though the real one doesn’t line up QUITE with the plot of Citizen Kane, or have much of anything to do with the building of the Civic Opera House.

Insull’s wife did appear onstage in 1925 on Broadway, but she was not an opera singer, and wasn’t even really an amateur. As a young woman in the 1890s, she’d been a professional actress under the name Gladys Wallis, retiring around 1900 to become a millionaire’s wife.

But the theatrical bug never left her, and in 1925, at the age of 56, she put together a charity run of performances of Richard Sheridan’s 18th century comedy, The School for Scandal, starring herself as young Lady Teazle, to raise money for a children’s hospital in St. Louis. It was so successful that Mrs. Insull decided to take it Broadway.

And, by all accounts, the production was a reasonably good one; such New York reviews as I could find were very kind (or at least very polite). The Daily News said that “without conscious effort, , she carried it to something very like a legitimate triumph.” About the worst review I could find was in the Brooklyn Daily Eagle, which gave the production a good review overall, saying only that “Mrs. Insull as an actress is not, to be sure, inspiring. She carries herself well, is not easily abashed, trips smilingly through the comedy without stumbling literally or figuratively and also without anything approaching brilliance. She has a nice manner and is hopeful that manner alone will answer for the many graces and subtleties an actress playing Lady Teazle should be heir to.”  They do seem like they’re being very courteous here, rather than simply saying “she was just okay,” but it’s a far cry from calling her an aging, hopelessly incompetent amateur.

No particularly bad review ever ran in the Times; if Mankiewicz did write a line about her being a hopelessly incompetent amateur, it didn’t run.  Several sources cite the New York Times article in question as one from 1925 entitled “Mrs. Sameul Insull Returns to the Stage,” but that article was a preview, not a review, written several months before she hit New York. The actual review that ran was very polite – Kael called it “a masterpiece of tact” – and said Mrs. Insull’s Lady Teazle was “as pretty as she is diminutive.” To call her an amateur wouldn’t exactly have been fair; she was a retired pro, though if Mankiewicz had some sort of grudge against Insull (and as rich and powerful as Insull was, he might have), one can imagine him being filled with rage over his wife being onstage and feeling any pressure to be tactful in his response. Look at how many people go ballistic when some viral video star gets a TV deal.

The Kane connections don’t quite stop there, but for further events to have inspired the movie, we’d have to use the term “very loosely based.” Insull did not build the opera house just to give his wife (or anyone else) a place to sing, but his wife did fail in the theatrical business in 1926, and Insull did built the opera house around the same time.

After her 1925 Broadway run, Mrs. Insull returned to Chicago for a few more performances that were kindly received by the press (who had no fear of criticizing the Insulls or printing gossip about them). Months later, Samuel leased out the Studebaker Theater, where his wife attempted to start a repertory company (and the Tribune did joke about it just being an excuse to do School for Scandal again), though Mrs. Insull worked mainly behind the scenes as producer, intending only to take a role now and then. The company was a flop, and Mrs. Insull brushed it off with a laugh and a frank admission that it was a waste of money – Chicago, she said, just wasn’t the right town for it.

It was around this same time that Insull started work on getting the Civic Opera building built, though he’d started well before his wife’s stint at the Studebaker went down – in December, two months after the New York run of Scandal, he first laid out his plans for the building. Already deeply involved in the local opera business, he initially wanted a 7.5 million dollar home for the opera – at the time, everyone thought the Auditorium Theater, where operas were usually staged was outdated and would be razed any minute. The plans eventually grew larger, until the new theater became a 20 million dollar building. Office space in the “arms” of the armchair-shaped building was to generate money to cover the costs of the opera, which was not a self-sufficient venture at the time; putting an opera on cost more than ticket sales alone could generate in the smaller Auditorium; there would be more seats in the new theater, but another source of income couldn’t hurt.

The Civic Opera building opened with a performance of Aida on November 4, 1929, only days after the great market crash.  Mrs. Insull never appeared there, and it seems that no one connected to Insull personally did, either, in the brief period between the time when it opened and the time when he lost all his money and fled to Europe. He’d been involved enough in local opera before that he could have gotten a love interest onto the stage without building her an opera house.

It’s generally known that characters and events in Kane are composites of real people, real events, and pure fiction; it’s not impossible that Kane and Mankiewicz were thinking of the Studebaker stint when they wrote about Kane buying his wife an stage, at least a little. Maybe they even noticed that the Civic Opera went up right around this time. There was also another Chicago millionaire from the era – Harold Fowler McCormick – who really did spend a fortune promoting an opera singer of questionable talents, for whom he even left his wife.

So there are bits of truth behind the connection between Citizen Kane and the Insulls, but the facts appear to have been mixed with other stories and given a fictional gloss, after which a little bit of muddy research turned into a misunderstanding that evolved into the grander urban myth that the Civic Opera building was built so that Insull’s paramour would have a stage on which to perform. All too often, this is how history works!

One thought on “Citizen Kane and the Civic Opera House”