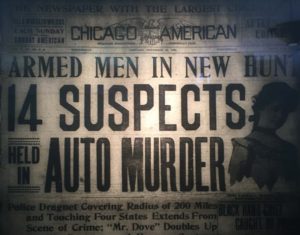 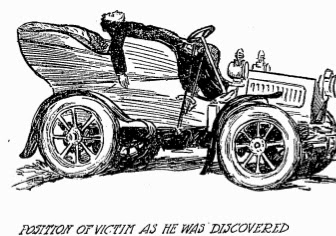 In 1904, a man who called himself “Mr. Dove” went to the desk at the Auditorium Hotel (above the still-operating Auditorium Theatre) and told a concierge that he wanted to rent an automobile for a few hours to drive to Joliet. After some hemming and hawing, he agreed to rent one at a rate of five dollars and hour – quite a sum at the time, but cars were still a real novelty in 1904, but the rental fee included a chauffeur to do the driving.

That chaueffeur, John William “Billy” Bate, arrived with a car from Canary’s Garage, and the two began a long drive down Archer Avenue out towards suburbia. From here, the details get a bit fuzzy. Of course, Chicago ghostlore fans will note that this ride would have taken them right by Resurrection Cemetery, as well as several other local haunted hot-spots. We even get a vanishing woman in white into the bargain here, as some witnesses (cars were enough of a novelty that there were many witnesses to the car on its journey) said that a woman in white was with them for a time.

The details of the ride are fuzzy. What is known is that late that night, the car was found abandoned, with Billy Bate’s murdered body splayed out across it. Mr. Dove vanished and was never found.

Reporters immediately latched onto six widely different theories as to why Bate had been killed:

1. There was an argument over the bill for the rental of the car. Bate may have been lost, and a fight may have broken out over whether Dove should pay anyway or what.

2. Mr. Dove had gotten into an argument with the “woman in white,” killed her, disposed of her body, and then killed Bate.

3. Dove and the woman were planning a crime, spoke too freely of it, and killed Bate because he’d heard everything (this was the garage owner’s theory).

4. Some suggested that Mr. Dove wasn’t the killer at all, but that Bate had been killed by an irate farmer who hated automobilists. The trib noted that “automobilists, specially the riotous type of midnight tourists, are in none too good odor withe the countryside out Joliet way.” You darn noisy kids and your horseless carriages!

5. Dove was drinking, started shooting his gun off for the fun of it, and accidentally killed Bate, then fled.

6. The most common theory with the driver is that Bate’s murder had been arranged by one of Bate’s many girlfriends.

Of course, some Chicago ghost hunters may have another theory: that the woman in white was the ghost we’d one day call Resurrection Mary, finally graduating from appearing aside carriages (as a mysterious woman in white was said to have done in the 1800s) to riding in automobiles, and her disappearing freaked Dove out so badly that he went nuts and started getting a bit trigger happy with his fun.

Of these theories, the “jealous girlfriend” theory probably makes the most sense. By all accounts, Bate was very popular with the ladies, and the evidence in the case backs this up. He was carrying love letters from a couple of women, and pictures of another hidden in his watch.

One letter, dated two weeks before, had one of the worst poems I’ve ever read: 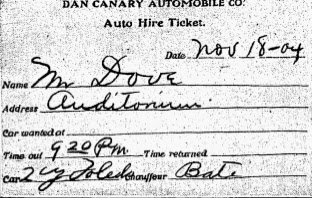 Now, keep in mind, these are just the letters Billy had on his person when he was at work. But by all accounts of the clerk at the Auditorium, Dove hadn’t been picky about who drove the car, as he would have been if he was specifically out to kill Bate on the orders of a scorned lover. 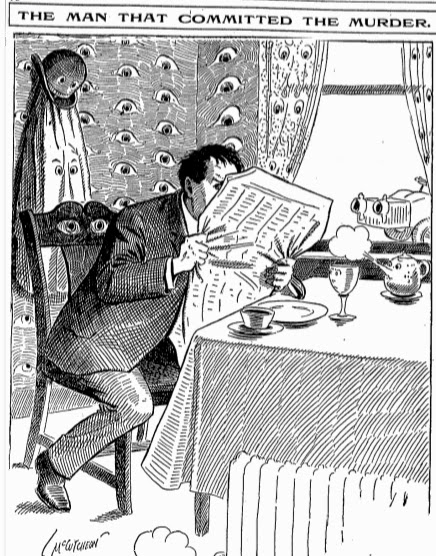 Evidence soon showed that Dove had run off to Romeo, IL,  in the immediate aftermath before the story broke, taking rooms and buying benzine to clean stains from his coat, and traces of him were found here and there, and one person remembered him nervously pacing in a house on Joliet Street where he’d rented a room, talking about a girl back in Pittsburgh (which is where the woman pictured in Bates’ watch lived). After trying to pay his bill, he walked out the back door towards the Rock Island railroad tracks, and was never seen again.

Several people were arrested on suspicion of being Dove, including notorious con man Yellow Kid Weil, but all were eventually let go. The mystery remains unsolved.