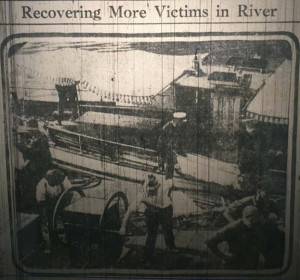 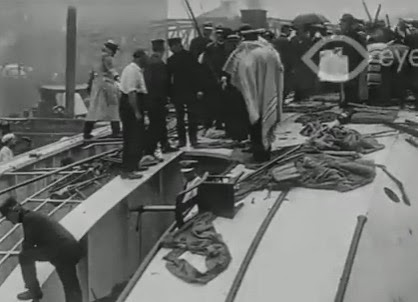 It’s actually part of my usual tour patter to say that we’re still looking for film footage of the Eastland disaster. Lots of film footage is known to have bee shot and exhibited, but like most of the hundreds of silent films made in Chicago in 1915, it was now lost. “New copies of old films we thought were lost are always turning up in barns and yard sales,” I’ll say. “So you never know.”

Now approaching it’s 100th anniversary, the capsizing of the steamship Eastland was the deadliest disaster in Chicago History. Loaded well beyond reasonable capacity with picnickers from Western Electric, the vessel tipped over in the river between Clark and LaSalle, causing the deaths of 844 people, including 22 entire families.

It’s well established that film footage of the Eastland Disaster was made – in fact, some early reports say that witnesses stated that what caused the ship to tip over was a rush of passengers attracted to one side of the ship by the sight of a moving picture camera.  Films of the disaster were being shown in theaters nationwide only days after the fact.

Now,  at least a portion surfaced in the last few days after it was discovered in a Dutch newsreel posted to Facebook by Jeff Nichols.

Film from the disaster itself and the righting of the vessel were uncovered. The first, a 55 second clip from the disaster, can be seen here. The relevant footage starts at 1:10 in the clip.

The second, shorter clip shows the righting of the vessel several weeks later, before it was towed to the Halsted Street bridge, where it was docked for some time before being sold.  It can be seen here and begins at 9:10.

Now, the question is: which footage is this? While it’s far from a complete version of the “movies” that were shown in 1915, it’s at least a fragment, and was probably taken from one of them.

Several different Eastland films were being distributed in the weeks after the disaster; of these, the most common (and the only ones that I can confirm were film, not slides), were made by the Tribune Company and the Hearst-Selig newsreel camera.  The Tribune version became a 1000 foot film that was shown to raise money for survivors; at least 40 prints were circulating at one point. It was banned in Chicago (as were all Eastland films), but could be seen as nearby as Forest Park.

Descriptions of both films exist:

The Tribune film was 1000 feet long (roughly 15 minutes). It was shown in City Hall a few days after the disaster for a small board who determined whether or not it could be shown in the city (they voted against it); in an article describing the showing, the Trib gave a fairly detailed description:

The pictures, taken for the most part from a fire escape on the Reid Murdoch building just across from the wreck, start in with a view of the great hulk lying flat, half out of the water, with policemen, divers and life savers busy over it, saving lives of such as could be reached.  The stretchers are shown with their covered burdens, some borne across The Kenosha’s deck and put into ambulances, some carried over the Clark Street Bridge to the Reid Murdoch building. The river full of various craft appears; the crowds massed near by and held back by the policemen; the auto trucks with blankets rushed forward from the great stores to wrap the victims as they were taken from the river.    There were repeated scenes of the Eastland itself and of the water about it. Also of the nurses and firemen at work about the Reid-Murdoch building.  Finally the pictures showed the Second regiment armory turned into an emergency morgue where many went to seek those who were gone, and with the crowds surging around it.   There are no horrors of a repulsive nature. All figures on the stretchers are covered…the distance of the camera prevented any close up effects at all, except of two girl survivors, safe and dry, who posed for the film.

Descriptions of the Selig-Hearst newsreel are a bit more vague. The few descriptions I could find mention shots of the ship, of stretchers being carried, divers doing rescue work, and crowds on the dock.

So, based on what we know, the differences are mainly that the Selig version seemed to show more shots of the crowd on the dock, while the Tribune version showed scenes from the armory, not just from the River. Of course, it’s quite possible that the Trib version had crowd scenes as well, and that the Selig could have had an armory scene that just wasn’t mentioned. Perhaps the only real scene that would seem like a smoking gun would be the shot of the two girls posing, which would identify any footage as being from the Trib.  As it is, some of the footage could have been made from the Reid Murdoch, which would be a point in favor of this being the Trib footage.

But, really, the first clip could come from either of these films, or from some other source altogether.  I’d never heard of there being footage of the ship being righted at all before now.

Jeff notes that more footage may be forthcoming.  The EyeFilm Institute also has the only known copy of an episode of Selig’s Adventures of Kathlyn serial.

My new book on silent film in Chicago: