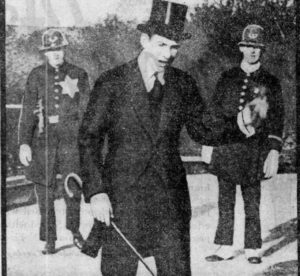 Depending on how you look at things, Cousin Jim might be the first “indie” movie ever filmed in Chicago. There were plenty of Chicago filmmakers doing experiments in the early days, but by 1916, films were big business, and nearly all were made by studios. Cousin Jim stands out in film history because it was not by pros buy by bunch of members of the Casino Club – a very early example of friends getting together and making a movie. Because these friends were high society types, their venture made a lot of news, and the premiere at The Strand Theatre, at 7th and Wabash, was a big event. The film even played out of town for a while – it was a Chaplinesque comedy, but ads for the movie in other cities show that exhibitors thought it would mainly be interesting to the audience because it showed how Chicago society people lived.
Though the two-reel movie itself is almost certainly lost, The Newberry Library has two copies of the script – one typed, and one handwritten by Kenneth Sawyer Goodman, namesake of the Goodman theatre. Goodman was attracting fame for himself as a playwright at the time, a leading light of the “Chicago Renaissance,” but Cousin Jim was not one of his major works. From the script, we can see that if it survived, the film would be a fascinating document of Chicago history and the history of cinema – but “fascinating” and “good” aren’t necessarily the same thing.
The son of a lumber baron, Goodman’s diary mostly shows him as a society type, dutifully recording which club he went to, who he dined with, and what yacht he was on on a given day. From what I read of it, you’d never guess he was considered a major, even edgy, writer at the time – in a way, it’s like reading Bruce Wayne’s diary and seeing nothing about fighting crime other than a meeting or two with Commissioner Gordon. Notably, it doesn’t say much about going to movies, and it’s likely that Goodman wasn’t really up to date on how the medium was evolving.  The script (apparently from a scenario by John McCutcheon, an Essanay studios vet) doesn’t show a lot of creativity in terms of how the story will be presented; as a playwright, Goodman seems particularly at a loss in how to work with far less dialogue. Hence, this is the way the film opens: simply showing close-ups of the characters and their names:
The “Count” is a waiter who knows that one of the society-men was caught cheating at cards in 1910, and blackmails him to be introduced around the clubs as a foreign big-shot, all part of his plans to marry one of the heiresses. But he’s thrown for a loop when Cousin Jim, alias Unlucky Jim, shows up in town.
Cousin Jim is a shameless Chaplin clone, alternately a victim of endless bad luck and daring adventurer (the script can’t seem to decide whether he’s a great hero or a comical loser). The Count proceeds to try to keep Jim away from society functions, eventually robbing a matron and planting Jim’s stolen fraternity pin at the scene, framing him for the crime.
Perhaps the most interesting thing about the movie is that it was proudly a Chicago film. I’ve seen most of the Chicago silent films that survive, and can’t think of any that make a real show of being in Chicago – most movies at the time tried to seem as they could be taking place in any old city. Cousin Jim wears the fact that it’s depicting Chicago and its socialites on its sleeve – indeed, though they generally lacked originality, the crew could have been among the first to say things like “the city itself is character in the film.”
It’s curious to note, then, that right from the start, Chicago movies seemed to have a strange sense of geography. In the 1980s, The Blues Brothers could get to Calumet City in 15 minutes, and Ferris Bueller’s dad somehow made his commute home to Highland Park by 5:30, a feat so impressive that I’d often joked about writing a movie called Ferris Bueller’s Dad’s Commute. Whatever wormhole they were using in the 80s obviously existed in 1916, a well – Cousin Jim leaves the Blackstone Hotel at 4:30, messes around outside the Art Institute (offering the lion statue a cigar), then has an adventure around the zoo and lagoon in Lincoln Park before making it back to the Casino Club, which was near the Magnificent Mile, at 5.
This adventure contained the films most famous scene: a sequence in which Jim throws two police officers off of the high bridge in Lincoln Park that was known as “suicide bridge.” News articles at the time noted that the stunt man brought in for the scene said the leap couldn’t be done, so the two actors simply did it themselves, somehow surviving a jump that most people didn’t (they called it “suicide bridge” for a reason).  It’s curious to note that Goodman’s script called for special effects here, not  a stunt:

A Tribune article notes that the movie was submitted to Major MLC Funkhouser, the city’s film censor – in those days, every movie had to be submitted to him, and the papers would detail which scenes he removed from any given movie (he was eventually caught charging admission to private showings of the cut bits). Though no cuts were noted from Cousin Jim, at least one scene in the script probably never would have made it past him:  while Jim is in the shower, the Count steals his clothes. Jim (presumably in a towel, though the script doesn’t say) has to run to the next house and knock on the door. A maid holding a banana answers, and eats the banana as she tells him that no trousers are available. She eventually gets him a dress to wear, leading him to spend the night disguised at the society ball as “Mrs. Pick” while the Count ransacks a wealthy woman’s house, even putting the goldfish in a top hat (a title card jokes that he can’t resist anything gold).  Scenes of robbery tended to be cut, and scenes of cross-dressing certainly did. If this scene got past Funkhouser, either he was feeling generous because the film was supposed to be for charity, or they bribed him.
It’s also in this scene that we get perhaps the biggest surprise: though it might not have been AS apparent to 1916 viewers, modern viewers would surely assume that someone was going to slip on the banana peel. Even 1916 viewers would have had to guess that “unlucky Jim” was about to take a fall on it – but it was the maid who took a spill.
From here the film descends into the inevitable chase scene, after which the Count is brought to justice and Jim is revealed to have been a member of the secret service all along (a twist that makes no particular sense), and everyone pairs off to get married (Goodman’s script calls for “rice and old shows”).
Though Goodman’s diary doesn’t mention the film too much – he wasn’t involved in the filming and missed the premiere – we can see from it that it was written very quickly; after several days yachting around Florida, he first heard of the project in March. Filming began only weeks later, and the movie premiered on June 2. He mentions going over the scenes with McCutcheon once, but that’s about it.  He does note, though, that after he finally saw it, a few days after the premiere, he asked for a couple of revisions and alterations to be made before the show went on the road.
The final film may differs quite a bit from the script – during the filming the Saddle and Cycle Club (at which Goodman was also a regular) objected to the Casino Club’s hunger for publicity and refused to let them film scenes there. The newspapers also describe a scene in which Jim goes fishing in the Fountain of the Great Lakes at the Art Institute, which may have just been improvised while they were filming the “giving the lion a cigar” scene (and making it even less likely that he could go up to Lincoln Park, have an adventure, and be back to the club at 5). And, again, it’s hard to imagine how they would have gotten the “eating a banana while she tells a near-nude Jim that there are no pants available” and cross-dressing scenes past Major Funkhouser.
The Newberry Library’s summary of the Goodman papers makes particular note of the Cousin Jim script, which I’m guessing would have shocked Goodman himself. A serious playwright, the papers feature manuscripts to a number of plays, including several collaborations with Ben Hecht. Though he collected a handful of clippings about the movie, the folder of clippings don’t include any of the large features about it that appeared in the Tribune during the filming, and it’s likely that he didn’t consider it to be a work of any major importance, particularly when his plays were being produced all over the country. Perhaps he still thought that movies would be a passing fad. In any case, he lived only two more years after Cousin Jim before succumbing to the Spanish Flu in November, 1918.
(Visited 56 times, 1 visits today)