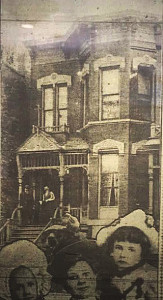 Neighbors who lived near St. Joseph’s Home for Orphans on East 35th in 1908 thought there was something awfully strange about the place. It was a religious home, run by a priest and few nuns, but they sure seemed to party hard there. And late into the night, too.

Fathern Anton de Lubicz, the priest in charge, was a fraud. Like Sam Cardinella, he seems like a guy who read a Dickens book and thought it was an instruction manual. In Cardinella’s case it was Oliver Twist, and for de Lubicz, it was Nicholas Nickleby, in which Nicholas works at Dotheboys Hall, a boarding school where headmaster Wackford Squeers pockets most of the money he should be spending on the care and feeding of the inmates and spends most of his time beating the kids and forcing them to do hard labor. That’s about what St. Joseph’s seems to have been like, with the added twist that Anton de Lubicz claimed to be a priest. Three “nuns” were sent out daily to collect alms, bringing in about $12 a day each.

By most accounts (certainly by their own), the “nuns” had been duped and thought they were real nuns; even the “Mother Superior” who was recruited from a Milwaukee Avenue restaurant where she’d been a waitress. But a servant employed in the home eventually went to the police and the anti-cruelty society with tales of midnight “orgies” and severe beatings of the dozen or so orphans who lived there in September, 1908.  “I never heard such a profane and vile-speaking man as De Lubicz,” she told the Tribune. “He never thought of the little girls he was wronging…nor of the orphans who often heard him, but he swore just like a trooper…. I have seen drunken carousals at the place at all hours.”

“We thought we had been taken into the church,” said one of the “sisters.” “I remember now that there were no vows of any kind and no training. We did not serve as novitiates…. we used to have mass read every morning. Lately the father has only said mass once a week. He declared it was too much trouble to have a daily service.”

The sisters were required to bring in $12 a day fro mbegging, or Father de Lubicz would be “very severe.” The Sisters of Charity outfits were never questioned anywhere. The Armour company donated fifty bucks; ledgers had Schlitz and Atlas brewing companies down for ten bucks each.  Ledgers listed smaller confirmations from several other companies – mostly brewers.

“When our day’s work was over,” said “Sister Fideljon” in the Chicago American, “we had a good time. We took off our charity gowns and put on our other dresses. The father used to bring his men friends to the house and would entertain them until late at night.  The children were beaten frequently; if they did not obey any of the nuns or the father they were soundly thrashed.” One nun told the Examiner that the beatings were administered with a horse whip.

The orphans were literally eating gruel; the servant who informed the cops said she’d been given only $3 per day to feed as many as 18 inmates. According to the Examiner, breakfast was usually small amounts of oatmeal and rye bread, lunch was bread and butter, and dinner was a small bowl of soup.

A member of the anti-cruelty society inspected the place and was appalled. It smelled like sewer gas, the children were barely fed, and there was garbage everywhere. The cops launched a raid on the place a couple of days later.

“Father” de Lubicz escaped the raid, but soon surrendered. “He told police that he was ordained by The Independent Polish Catholic Church, and had paperwork to back it up, and claimed he was just a scapegoat being dragged through the mud by the former servant, who had been fired.  Other priests insisted that his paperwork was bogus.  “All priests have women in their employ,” he told the Examiner. “And I consider it no sin to drink beer.” This may have been so, but “Father” de Lubicz also had a wife and children living on Leavitt Street, near North Avenue, which would have been distinctly unusual for a real priest.. When found by reporters, his wife wept and said he was “a bad man.”

The next month, he was found guilty of cruelty to children and fined $5.
He was still on trial for other charges related to the orphanage when he skipped his bail and went to Canada, where he was caught again in January, 1909. He was extradited back to Chicago, but I’ve yet to find any data on what happened to him.

One thought on “Fake Nuns and Drunken Revels at the Phony Orphanage, 1908”