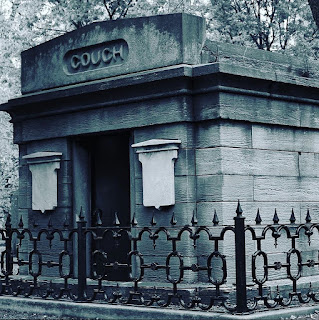 “There have been violent deaths enough in Lincoln Park to furnish a ghost for every shadowed nook within its confines.” – “Visited by Ghosts,” Chicago Tribune, 1898.

Lincoln Park certainly seems like it OUGHT to be haunted. For twenty-five years the grounds served as the City Cemetery, and it’s well known that many – perhaps thousands – of bodies were never moved. Construction in 1998 alone unearthed 81 bodies! The Couch Tomb still stands on the south end – and Adam has pictures of what’s behind the door!

Early cops who patrolled the park definitely thought that it was haunted, and not just because of the graves – in the early days, there was a bridge known as “suicide bridge” over the lagoon.

The GHOSTS OF LINCOLN PARK walking tour covers the early history of the park and tours the relics of its time as a cemetery, with ghost stories along the way taken from extensive research, then detours over to the site of the famously-haunted site of the St. Valentine’s Day Massacre of 1929.  Like all of Adam’s ghost tours, the stories tend toward the historical, “what do we know and how do we know it” side of ghostlore, examining the back story and how the ghost stories spread and grew. His philosophy is, “When the legend is better than the fact, tell both and explain which is which.”

Offered publicly as a seasonal tour; check for dates. Privately available any time.

Some “City Cemetery” articles on the Mysterious Chicago Blog