One victim was Mrs. Mary Puts, 1210 Addison. More than $2000 worth of jewelry was found on her person after her body was recovered from the interior of the boat – a lavaliere containing three diamonds, several diamond rings, a pair of earrings containing two diamonds each, a cameo pin and ring, and a gold wedding band.  The jewelry was taken by two patrolmen and given over to the DeWitt Cregier, the city custodian, just as it should have been (the police seem as though they may have been more careful to handle valuables found on victims in this manner after what had happened with the Iroquois victims).  But when Joseph, her husband, went to the office to retrieve them, they couldn’t be found. I don’t know if they were were.

More common that this seems to be a particularly dastardly form of robbery – ghouls would go right into the homes of the bereaved families of the victims. This type of thieve, known as a “mourning raffle,” would go into the homes of victims during their wakes, kneel beside the mourners, and approach the coffin, then deftly steal the jewelry from the coffin. if they had the room to themselves, the sometimes also stole furniture, pictures, and anything else they could get their grubby hands on. The Tribune reported at least a score of these “raffles” were operating in the Cicero area, and the police began to station guards at the homes of the grieving families.

One Tribune article did refer to there being ghouls caught stealing from victims as they were pulled from the hull of the ship or as they were laid out in the improvised morgues.

Heres a photo of the disaster site taken by Lynn Peterson on one of the tours just last week – some see the image of a person trying to climb out of the river in the photo. 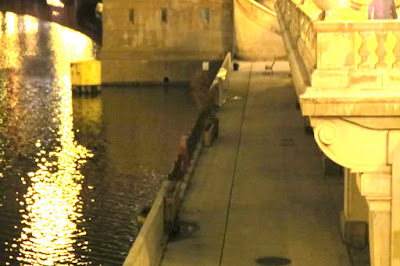