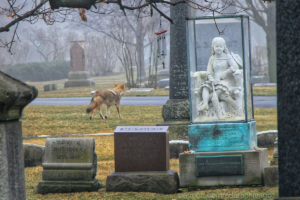 Few monuments in Chicago have captured Chicago’s imagination like Inez, the girl in glass at Graceland Cemetery.

For years a legend circulated that the girl, Inez Clarke, was killed by a lightning strike when her parents locked her outside during a storm, and that now the statue would vanish whenever it stormed. Some even said that her ghost was seeing playing the cemetery (though it’s one of those ghost stories where author say “many people have claimed…” but you never seem to meet a first-hand source).

We should really let her poor mother off the hook; in recent years it was found that she died of diptheria. About 15 years ago, it became known that cemetery records didn’t list any Inez Clarke at all: the person buried by the statue was a boy named Amos Briggs, and there was no record on an “Inez Clark” dying in Chicago in 1880 at all, and a letter on file from Mary Clarke said that she had no daughter. It’s true about the cemetery records – where the confusion came from isn’t clear – but genealogist John Binder noted that there wasn’t a record of an Amos Briggs dying that year either, but there was an Inez Briggs. In the 1880 census, Inez Briggs was living with her grandparents, David and Jane Rothrock, who are buried right beside the statue. This cleared most of the mystery up. “Clarke” turned out to be Inez’s mother’s later married name. The letter on file was an heirship affidavit from Mary and her new husband, saying that they had no children. Mary’s father, Civil War veteran who died when Mary was young, was named Amos McClure; this may be a clue, or may just be, you know, one of those things.

In researching my new book on Graceland (out next year), I found Inez’s parents’ divorce records, which cleared up quite a bit more. Mary McClure was 16, and living with her mother and stepfather (The Rothrocks) on Center Avenue when she married Wilbur Briggs in a small ceremony in the Rothrock home. (There were lots of Center Avenues over the years; I believe this one was now Armitage). Baby Inez was born about a year later.

Divorce records indicate that the couple and baby continued living with the Rothrocks; Mary was still young, and Wilbur was a hopeless drunk. He was employed as a laborer off and on, but didn’t last long on any job, and often disappeared for days at a time. A couple of years into the marriage, 18 year old Mary laid down the law: Wilbur had to either quit drinking, or leave. He left, and was never seen again.

Next to the Inez statue is a small marker with a now-worn lamb; this is Dilbert Briggs, Mary’s other child, who was born 15 months after Wilbur left. I don’t know who his father was, and, really, it’s none of my business. In any case, it couldn’t have been Wilbur, and Mary must not have married him, since the child’s last name was Briggs. Dilbert died of cholera infantum (a disease now thought to have probably been misdiagnosed malaria) when he was just a few months old.

His presence, though, kept Mary from seeking a divorce from Wilbur. In divorce proceedings in those days, she was going to be asked things like “have you been a faithful wife?” and “Did you do everything you could to make the home a happy one?” If she had a second child by another man, she might not have been given the divorce. After Dilbert’s death, though, she went to court, and when asked about children, simply said, “I have one.” Her mother backed up her claims about Wilbur, and when asked who took care of Inez, Jane said “I have always, and can still.” Wilbur was rumored to be living in San Francisco (Oscar Wilde once noted that everyone who vanished was rumored to have been seen in San Francisco), but attempts to contact him went nowhere. Mary was granted the divorce and full custody of Inez.

From the testimony of Mary and Jane (who went by Jennie), it seems that Inez and her mother always lived with the Rothrocks. But when the 1880 census taker came, a few years after the divorce and shortly before Inez’s death, Inez was living with them and Mary’s older brother, Philander, but Mary isn’t listed. She may have just been off on her honeymoon – she likely married John Clarke just shortly before Inez’s death. A date for the wedding isn’t known, but in some paperwork on file at Graceland, Mary refers to herself as “Mrs John Clarke” but signs her name as “Mary Briggs,” an indication that she wasn’t used to her new last name. When Inez died, David Rothrock and John bought the new plot, and had Dilbert was moved there from a single grave elsewhere in the cemetery. Mary seems to have been pregnant again when Inez died; her third child, Beatrice, was born months later.

Years went by, and when John died he was buried in the space in front of Delbert (he has no marker of his own). Mary moved to Los Angeles, where the now-grown Beatrice was living with her husband and her own daughter, named Inez after the sister she never got to meet. When Mary died, she was buried next to John, just in front of Inez. The plaque on the base of Inez’s statue serves as a marker for the two of them.

None of this really tells us a great deal about Inez herself – we don’t know what songs she liked to sing, what games she liked to play, or even a single anecdote. We don’t know whether the statue looked anything like her, or was just a generic “little girl” look (there are lots of graves out there with generic “girl” statues; if you go to several different cemeteries you see the same ones over and over). Some believe that it was just a sample statue built by the sculptor, Andrew Gagel. Though the family has been in contact with Graceland over the years, there’s really no way of knowing. Some things about her are simply bound to remain a mystery.

Adam’s new book on Graceland Cemetery is due to be released next year from University of Illinois Press. In-person tours are not allowed at Graceland this year due to the pandemic, but he hosts regular virtual tours on the Mysterious Chicago facebook page.