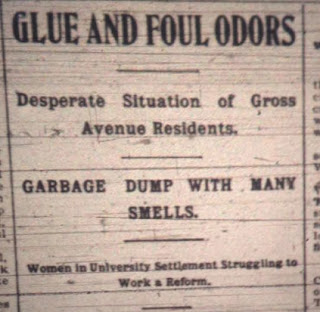 I can’t help but be amused by this bit from an August, 1895 issue of The Chicago Mail, saying that Gross Avenue was, well, gross.

The area in question was a garbage dump (“with many smells”) at 47th and Gross Avenue (which is now McDowel, putting this right at 47th and Ashland).  Beside the dump was a university settlement, which got odors not just from the dump, but also from a glue factory a block to the north.

This isn’t gonna be one of my “big substance” posts – just a bit of a break between all the Holmes stuff to say that Gross Avenue was gross!