My, the things one finds on genealogy sites! More and more records come online all the time. Death certificates have never been THAT hard to get, but you normally have to pay to get them from the state archives, and I’m pretty cheap. In cases of hangings, I already know the cause of death, after all. But it’s still interesting to see the records on some of these:

Here’s one for Nicholas “The Choir Singer” Viana, who was on his way to choir practice when he first wandered into Sam Cardinella’s pool hall and committed his first murder a week later. He was hanged on his 19th birthday, and, according to legend, was briefly revived after being taken down. Cardinella was a guy who seems to have read Oliver Twist and thought it was a how-to manual. He’d lure kids into his pool hall, then teach them to commit crimes and send them out to rob and kill. 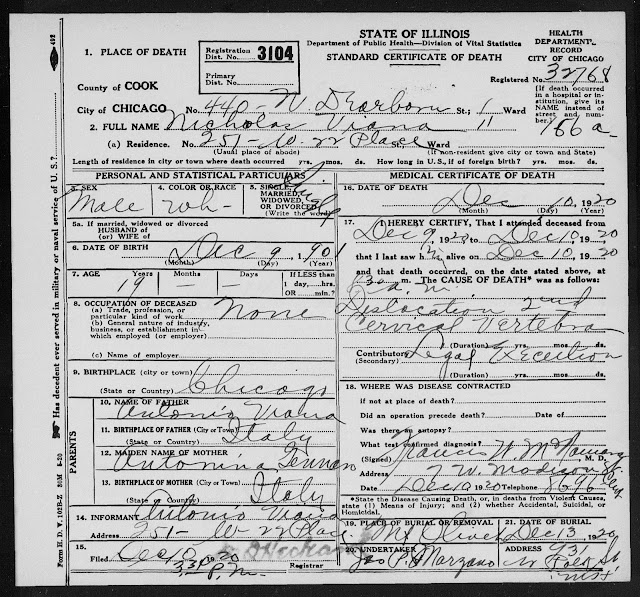 Cardinella himself was hanged sometime later. he had lost a ton of weight, and collapsed on the scaffold – they had to hang him tied to a chair. All this was a part of his own grand plan to escape! Low weight and a shorter drop meant it was less likely that he’d break his neck, meaning that, in theory, they COULD bring him back to life. His friends took possession of the body and loaded it into an ambulance, where authorities found a team of doctors trying to resuscitate him. A similar ambulance carrying Viana had been allowed to drive away, though how successful they were in attempts to wake him are strictly the stuff of rumor. The certificate above indicates that they couldn’t have gotten THAT far, but the story was always that they’d simply gotten him to start groaning a bit before stepping back and letting him die. 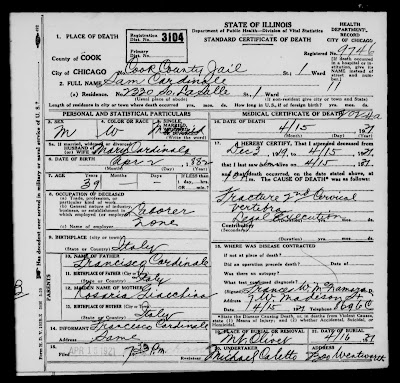 Fun fact: no two records I’ve seen spell Cardinella’s name the same way! Some go with Cardenelli, or Cardanella. This one goes with Cardinale.


Read more about it here: