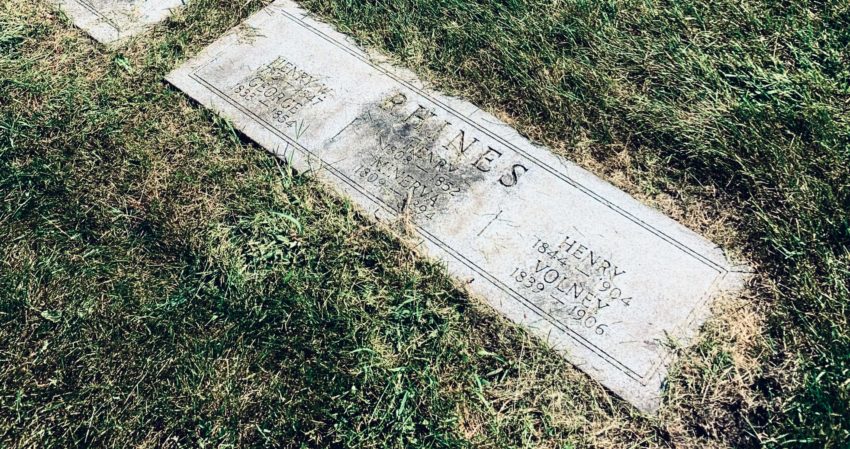 In 1851, a man named Moses Johnson was arrested as a possible runaway slave. During the trial Johnson was kept in a locked room under heavy guard.

According to a report in the Western Citizen, one of the men who was supposed to be guarding him got drunk and started guarding the place next door instead. When the person who lived next door came home, the guard blocked him, pointed a gun, and said “No one gets in without saying the password.”

The man thought for a moment, then said “Fillmore” and the guard let him pass.

The whole incident has such a Bugs Bunny quality that it’s difficult to believe that it’s true – it’s just the kind of story an abolitionist would tell about a man who guarded an accused fugitive slave (who, for the record, went free when the brilliant legal work of George Manierre and E.C. Larned established that the slave catcher had the wrong man). If it’s true, though, it’s likely that the guard was Henry Rhines, who had been named as one of the guards helping the sheriff that day – and had already been called “a degraded, drunken wretch” by newspapers as far away as New York five years earlier.

In the 1840s and 1850s, there were a number of incidents when a person accused of being fugitive slave created a sensation in Chicago. Though slavery had its supporters here, downstate papers would refer to the city as “a cesspit of abolition,” and people who tried to assist slave catchers did so at their peril. In many cases there would be near-riots outside the courtrooms (or actual riots, depending on which paper you read) as a tight-knit team of anti-slavery lawyers worked to clear the accused. Sometimes the legal work was just a distraction to help the accused escape custody. The fiercest of the lawyers, James H. Collins, was known to say that no officer had a right to arrest a fugitive slave in Chicago, and that it was perfectly okay to use force against any who tried. They were, after all, attempting to kidnap a person.

The various incidents can be divided into two categories: those in which the arresting officer isn’t known, and those in which it was Henry Rhines. Rhines, a grocer by trade, was one of three constables serving under the sheriff in 1840, and was heavily featured in the arrest and interrogation of John Stone, the first man hanged in Chicago (as covered in a recent post). But in his moonlighting as a police officer, he was better known for his habit of arresting black people who hadn’t raised enough money to draw up legal papers establishing that they were free.  As early as 1844, when he tried to run for office, a man who voted for him was slammed for his support of “the notorious negro catcher.”

The earliest incident I have on file for him is 1843, when he helped William Shields, a St Louis slave-owner, capture a man named Eli Robinson that the Shields claimed was a runaway. Rhines went all the way to Milwaukee, jumped Robinson in the street, and took him in custody tied in ropes. When asked in court what papers he had giving him the right to such an arrest, Rhines only said “That is my business.” Though his actions were immediately pointed out as illegal, the Chicago court ruled that they didn’t have the jurisdiction to punish him for things he did in Wisconsin.  I have not been able to figure out the result of that trial, which attracted very little attention at the time (I’ve only seen it covered by the Western Citizen), though it’s worth noting that the people Rhines attempted to kidnap always seemed to be freed eventually, either by legal manuevers casting reasonable doubt on whether they were fugitives, or simply by citizens helping them escape prison.

Besides being a kidnapper, Rhines was also likely a murderer himself. In 1847, a saloon keeper named Timothy Dunn told Rhines exactly what he thought of him, and Rhines fatally shot him. He was confined to the jail himself for some weeks, but in December, papers reported that he had escaped. The whole affair must have blown over, because several 1851 reports of the Moses Johnson incident name him as one of the guards who assisted the sheriff, though he was apparently no longer an official policeman by then.  Perhaps he would have gotten better; some of the others listed as helping him guard fugitives or working against them in court became Union soldiers and even vocal abolitionists during the Civil War.

Much of Rhines’ life is unknown, and should probably stay that way. When lawyer James H. Collins died of cholera in 1854, groups and papers fell over themselves to write tributes. But when Rhines died at 45 in 1852, papers seem to have taken no notice of it. His cause of death is unknown, but one sort of hopes that it was something particularly unpleasant.

He was buried in the old City Cemetery where Lincoln Park is now. In 1869 he was moved to Graceland, and is buried in a plot there where he shares a small stone with his father (Henry W. Rhines, born 1782), his wife, and his three sons, including, Henry “Dump” Rhines, who became one of the country’s most famous billiard players. Manierre and Larned are not far away from him, and Collins is just on the other side of the cemetery. Rhines isn’t on many of my tour routes there, but sometimes I swing by his grave, say “Filllmore!” and do a little dance on it.