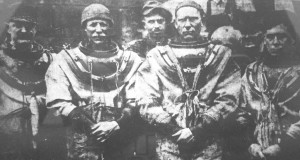 Early on in my time as a Chicago ghost tour guide, I heard a story that one of the divers recovering bodies from the Eastland had gone insane and spent the rest of his life in a mental hospital. I repeated it on a few early tours, but, unable to find a source to back it up, I phased it out of my stories, but I get asked about variations on it now and then. Just last week, someone asked me if it was true that a German diplomat had killed himself after seeing a ghost at the Eastland site (I have a pretty good idea where both stories came from).

Divers at the Eastland were heroic, to say the least. They were responsible for many of the “good” stories that kept people’s spirits up. According to the Chicago American, cheers and laughter erupted from the crowd on the docks at 3pm when diver came up carrying a baby that had been in the hull of the ship for eight hours – and was still alive.

But the idea that a diver would have trouble keeping his composure during such gruesome work didn’t seem unreasonable, and a similar story was told in the Chicago Examiner on July 25, 1915, the day after the tragedy.

Diver Morris Jorgensen worked for three hours in the river on the day of the disaster, and was one of only a few “able to penetrate the grewsome (sic) tunnels made by the decks of the sunken vessel against the river bottom, where hundreds of bodies were pinioned, and remain there for any length of time. Most of the divers went into hysteria as soon as they looked beneath the vessel and had to be drawn to the surface.”

After working for hours, Jorgensen came up, removed his helmet, and gasped for breath, muttering about the bodies as he staggered up to the top of the ship. When told by Captain Baer of the police to move away from there, Jorgensen let forth a hysterical scream.

Two policemen, including Baer, decided that they had to knock Jorgensen out, and set to clubbing him about the face until he lost consciousness. He came to and was able to say his name on the way to the police station.

“Had to do it,” Baer said. “He was out of his head. He is a strong man, and would have thrown some of us into the river if we hadn’t subdued him.”

While we’re talking about divers, I should also mention William Deneau (alias Frenchy Deneau) who was said to have recovered around 200 bodies. On the 43rd anniversary of the disaster in 1958, he came to the Clark Street Bridge to reminisce. At the time, he said he’d recovered 300 bodies, and said that he didn’t believe that the ship had really been sold for scrap in 1946.  “I rode on that ship last year on a run from California to Catalina island,” the now-Los Angeles-based Deneau told the Tribune. “It used another name, but I knew her as soon as I saw her.”

From what we know of Deneau, he seems to have liked to tell stories, and perhaps wasn’t the type to let facts get in the way of a good one. A few months after the Eastland, he was the one who found the wreck of the Foolkiller, a homemade submarine, in the river and put it on display on South State street (a story we’ve covered in depth!). Some have suggested that Deneau built it himself as a stunt, but this theory ignores just how risky it would have been to put ANYTHING in the river when the Eastland investigations were still going on. People investigating had to be assured that the sub hadn’t caused the disaster (the captain continued to maintain that pilings on the riverbed had caused it to tip over).

A grandchild of Deneau once left an anonymous comment on my page saying that when they took their grandfather to the Museum of Science and Industry, he made jokes about the U-505 submarine being a “foolkiller.”  If any Deneau relatives are out there, I’d love to chat!