My massive new book, HH HOLMES: THE TRUE HISTORY OF THE WHITE CITY DEVIL is out now from Skyhorse Publishing, on the heels of starred reviews in Booklist and Library Journal!

In 1895, as the Chicago police dug through the building now known as the “Murder Castle of H.H. Holmes,” Inspector Fitzpatrick was asked about new rumors linking Holmes to the murder of Mrs. Kron, a Wilmette neighbor of Holmes who’d been brutally murdered a few years before. Fitzpatrick brushed it off. “That theory is ridiculous,” he said. “The murder of Mrs. Cron was done in too crude a manner for Holmes to have had anything to do with it. He was a scientific criminal and would never think of engaging in a burglary or shooting a person in cold blood. You might as well connect him with the Cronin murder as that of Mrs. Cron, or even with the ‘Jack the Ripper’ horrors in London, England.” (“Tell Tale Letter,” Chicago Evening Journal, July 27 1895)

Little could he have guessed that a century or so later, people would be being talking about Holmes as a ripper suspect! This was the main premise of The History Channel’s American Ripper, on which I appeared in several episodes and served as “consulting producer,” which basically means that I provided them with a lot of data. Some of it was used in the show, some of it wasn’t.

Quite a few people have emailed me asking about the parts of the book that place Holmes in the United States during the Ripper murders, and now that the show is ended, I think I can put this post up laying out what evidence I’m using.

A bit of background: In Autumn of 1888, a number of prostitutes were brutally hacked to bits in Whitechapel, a rough neighborhood in London. Though the killer was never identified, he went down in history under the name “Jack the Ripper,” based partly on a letter received by the police (which was likely written by a reporter, not the killer). There are dozens of theories as to who the killer was and what motivated him, and no one is totally sure how many murders could really be attributed to him. The five “canonical” victims, the ones that are generally agreed on, were Mary Ann Nichols (Aug 31, 1888), Annie Chapman (September 8), Elizabeth Stride (September 30), Catherine Eddows (September 30), and Mary Jane Kelly (November 8).

Other possible “Ripper” victims are spread between about February, 1888 and well into 1889 and beyond. But going just by the canonical five, the most important question is: can we tell where Holmes was between late August and early November, 1888?  You often hear that Holmes disappears from the record during this period, which was true if you only go by the data that shows up in a google search or a couple of 20th century Holmes books, none of which really talk about where he was in that period. But those books, and particularly the hundreds of blog posts summarizing his career, are based on incomplete data. During most of that period, he would have been working in the drug store of the “castle’ building (which was built earlier than most sources say, from Aug-Oct 1887), and dealing with lawsuits over its construction.

Though I’ve never found a true smoking gun like, say, a signed promissory note taken out at the Bank of Englewood during those dates, there is abundant documentary evidence that Holmes was in the United States during that whole period. Indeed, though there are lots of stories and rumors about him going to England or South America, there’s little or nothing on record to suggest that he really ever left North America in his life. The only real thing suggesting he did is a letter he wrote to District Attorney George Graham in May, 1895, mentioning that the New York Herald was hard to find in London as of a year before. And we know that Holmes could not have been in London in Spring/Summer 1894, when he was busy in Fort Worth, Denver and St. Louis, so he was either going on something he’d been told by someone else, or just making things up.

Detail of voter roll dated Oct 9, 1888. It’s a clerk’s handwriting, but that’s definitely the same Holmes. It’s the pre-1909 address of the castle.

The Waixel and Kimball suits, looked at from a certain angle, could actually strengthen the idea that Holmes was in England from August to November. He was a no-show in court in late October when the Waixel case was called (after having shown up for it in late July), and the September paperwork in the Kimball suit saying no property could be found and Holmes hadn’t paid up as ordered may just mean that Holmes wasn’t around; there’s no mention of the deputy actually searching the place.

However, that could also back up the stories of him going to New Hampshire in late October, a timeline of the suit with Aetna Iron and Steel places Holmes far more clearly in Chicago right in the middle of the London murders.

The facts of the Aetna lawsuit are these: In Spring of 1887, Holmes entereded into contracts with Aetna Iron and Steel, as well as will Berger and Gallouner, architects, to design, supply materials, and build his new building at Sixty-Third and Wallace, the one we came to know as the castle. Construction began that August of 1887 – details of it are pretty well enumerated in the lawsuit that Aetna and the architects launched the next summer when they hadn’t been paid (many relevant portions of the suit are in the ebook companion to my Holmes book, Very Truly Yours HH Holmes, which includes over 100k words of letters, articles, depositions, etc by Holmes and his various associates, many of which have never been published).

It’s harder to place him in a courtroom during the first few months of the Aetna suit, but a few things in the pile of paperwork that survives make it seem clear that Holmes was around Chicago that Fall. On the surface, the most damning is this filing, stamped Sept 18, 1888, stating “Now comes Lucy T. Belknap, Harry H Holmes…” etc: 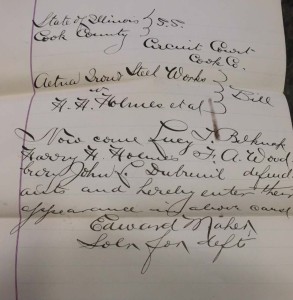 However, this piece alone isn’t quite the smoking gun it looks like – Holmes didn’t necessarily have to be present for his attorney to enter his appearance.

Far more damning, though, is the fact a few days later (probably Sept 24th), Aetna Iron and Steel put in a lengthy affadavit telling the story of their dealings with Holmes; so did Berger and Gallouner, who were made parties to the suit only on September 21. On September 26, 1888, Berger’s lawyer filed a notice to Maher that he’d obtained a ruling for Holmes to answer their charges within twenty days.

Maher seems to have tried to get out of it; he answered with a demurrer (a legalistic way of saying “so what?”), but on October 3 the court denied the demurrer. Hence, in accordance with the ruling, Holmes’ answers were filed with the courts on October 12, 1888. From the detailed answers in the paperwork, it’s fairly clear that Maher met with Holmes to speak to him, and this meeting probably would have had to have happened between Oct 3 and Oct 12, and couldn’t have been before the late September date on the affidavit he was answering.

So, to sum up, the data is pretty clear that Holmes was in Chicago, dealing with the lawsuit, in late September and Early October, 1888, which would make it impossible for him to have committed the Jack the Ripper murders.

But, again, these aren’t necessarily smoking guns if you’re really determined to believe Holmes was in London at the time. The October, 1888 date in the 1894 papers talking about his New Hampshire trip never comes from a direct quote, just a summary of what the relatives were saying. They could have been a bit off. And theoretically, Holmes could have sent a someone else to register him to vote, and brought Myrta with him to London (or some have suggested that perhaps he wasn’t really Lucy’s father). Maher could have written the answers all on his own (though how he knew the answers to some of what Aetna and the architects claimed is hard to explain). And if Holmes never spoke of the trip, well, one could say that a trip to kill prostitutes is the sort of thing you’d want to keep quiet about.

But these seem like stretches to me, to say the last. In particular, sending someone to register to vote for you would be a lot of effort, and a big risk – individual voter fraud has always been a high risk, low reward sort of swindle, which makes it a very rare crime.

And that’s just the documentary evidence placing Holmes in Chicago. Stronger still is the fact that Holmes doesn’t really make that good of a candidate for the Ripper to begin with, as he just wasn’t the sort of killer who went around hacking random prostitutes to bits. Though he is often portrayed that way these days, as a killer who used gas chambers, hanging, and stabbings stories of him being that sort of killer have more roots in tabloids and pulps than from more reliable sources. There are only a handful of known victims (plus some “maybes,” see my list), and none were random. None were stabbed to death – in all cases where there’s much to go on, he seems to have favored poison.

For a lot more on HH Holmes, of course, check out my book, HH Holmes: The True History of the White City Devil, the most comprehensive biography of the man yet, out now from Sky Horse, and the ebook companion collection of his writings, Very Truly Yours HH Holmes

Some previous Holmes posts on the blog that cover topics I discussed on the show:

The Hanging and Burial of HH Holmes – in detail

Did HH Holmes Fake His Death?

Holmes and Jack the Ripper: Chicago Evidence (Video on Youtube)

Now that the show has wrapped, I think i can discuss this all more freely; email press and media inquiries to  adam AT mysteriouschicago.com .

5 thoughts on “HH Holmes and Jack the Ripper: The Chicago Evidence (with podcast)”