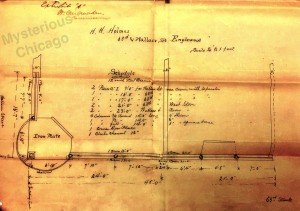 I’ve been sitting on the above photo for quite a while, but now that advance copies of my book, HH Holmes: The True History of the White City Devil, are going around and they include it, I figure it’s time to release this one to the wilds of the internet.

The initial construction of the building now known as the HH Holmes “Murder Castle” took place in 1887 – at the time, it was just a two story building, with retail on one floor and apartments on the next. The third floor, which was ostensibly to be used as hotel rooms, was added in 1892.

The details for both phases of construction are well documented for one simple reason: Holmes didn’t pay his bills. In 1888, he was sued by Aetna Iron and Steel, who provided materials and labor. The architects sued him as part of the same lawsuit. Later suits with suppliers, investors, and insurance companies give excellent insight into more details.

Though I’ve found about 60 Holmes-related lawsuits in the legal archives, Aetna Iron and Steel vs Lucy T. Belknap (Holmes’ mother-in-law), is probably the one with the best info. Dragging on for over a year, Holmes filed affidavits telling the story of building the place, personally cross-examined a couple of workers, and more. There’s a ton of exciting data folded into the suit.

But nothing is quite as cool as the castle diagram, drawn by architect Edward Gallauner on a large sheet of very thin paper: 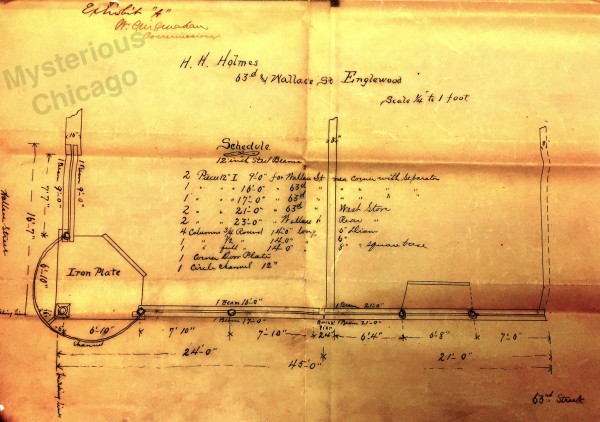 It shows only the front portion that will face 63rd Street, and doesn’t have anything as lurid as, say, “torture equipment here,” (the bits about torture gear in the castle wouldn’t become part of the story until the 1940s), but it does give the exact dimensions of the front of the place. Other descriptions of it vary a little bit as to exactly how wide the place was.

Just for some perspective to help you see what we’re looking at here, here’s the diagram with the famous New York World diagram of the second floor overlaid:

I’ll be covering more of the suit in a couple of upcoming blog posts, and transcribing some of the most important bits in Very Truly Yours, HH Holmes, a supplement to HH Holmes: The True Story of the White City Devil, which will include over 120k words of Holmes’ letters, statements, articles, confessions, affidavits, and more, many of which have never been published, and many more of which haven’t seen print since the 1890s.

In the mean time, here’s another plug for HH Holmes: The True History of the White City Devil,