Can you hypnotize a person into confessing to murder? Probably not. But stories of police using excessive force and dirty tricks to get a confession out of someone when they don’t really have the evidence to convict them are nothing new.  In old Chicago, they were incredibly common.

This is the city, after all, where the chief of police once killed a guy because he looked like he might be an anarchist. There were allegations that the police planted evidence, covered up crimes, and more even then. And just the other day I ran into an article about Kate Kane, the city’s first female lawyer (about whom I’ll do a whole post soon) being thrown out of the mayor’s office when she came in to loudly accuse the Chicago police of covering up murder. The Chicago police have always had an uneasy relationship with the people of Chicago, at best.

While I was updating the Fatal Drop book on hangings in Chicago, I ran into something I hadn’t seen before: Judge Goggin, whose name comes up a lot when you’re researching Chicago crime in the 1890s, once planned to write a book alleging that the police covered up murder, got away with murder, and knowingly framed innocent people just to get cases out of the way. The book was never published, but the Tribune did put out a couple of excerpts. In it, he makes some pretty bold claims about how the police handled “Buff” Higgins, who was hanged for murder in 1894.  Here’s the excerpt:

Buff Higgins was arrested on a charge of murder and taken to the Maxwell Street Station. There he was stripped naked and thrown into a cell, where he was left for four days without food. During this time Attorney A.J. Hanion called to see Higgins and was refused admission. The fourth day of his confinement the Captain in charge of the station went down to Higgins’ cell to see him and said: ‘Buff, it is an outrage for you to be treated like this. You must be feeling pretty slim. Don’t you want a bottle of whisky?’ Higgins replied that he would like to have something to drink, and said that if the Captain would look in the pockets of the clothes that had been taken from him he would find some money with which  to buy liquor. Fifty cents of Higgins’ confiscated coin was spent in this way, and he was given a good-sized flask of grog. Having had nothing to eat, and weakened by his fast, he drank the pint of whisky in a few hours and became hopelessly drunk.

While in this conditions he was again called upon by the Captain, who repeated the statement that Higgins was being treated outrageously, and told the latter that he was not guilty, and ought not to be in jail at all. With that the police captain told his charge that he would send down the clothing that had been taken from him when arrested, and wanted him to come up to his office. Higgins complied, and in the Captain’s office was shown a paper which, he was informed, was a written statement setting forth the claims of innocence Higgins had made to the police when arrested, and giving an account of the prisoner’s whereabouts at the time of the commission of the murder. He was asked to sign this paper, and under the supposition that it was a statement of his innocence, and a claim of an alibi for himself, he signed it.

The paper contained a complete confession of the crime, including particulars as to the manner of its commission, and upon the strength of that statement Higgins was hanged, and for a crime of which the police knew him to be innocent. It was not Higgins’ first experience with the police, though his last. He had been arrested over 200 times, the first time on a charge of stealing a bunch of grapes, and though the police had never secured his conviction on any charge of larceny, or burglary, or any similar offense, he had been sent to the bridewell over 100 times on charges of disorderly conduct, vagrancy, and the like.

Now, it should be noted that Goggin didn’t say where he got this information. Goggin himself was quite an interesting character; he’s probably best remembered now for letting Kittie Adams, the notorious pickpocket of South State Street, off the hook when she was brought in for robbing a guy on the grounds that if the guy went into that neighborhood at night, he deserved what he got.

But it certainly wasn’t the only time the Chicago cops were accused of something like this. In the early 20th century, a man named Richard Ivens was hanged for murder in Chicago. Ivens had found a woman’s body in a barn that his father used as a carpenter shop near Fullerton and Halsted; the seemingly random murder of a random woman shocked the city and led a doubling of the liquor license fee and a huge increase in the police force. Ivens himself was arrested and confessed to the crime. About a dozen reputable witnesses served as alibis for him, no real evidence linked him to the murder, but a confession was a confession. 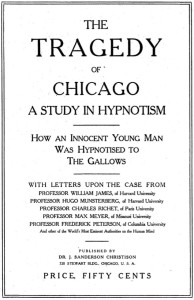 A couple of years after the hanging, a criminologist name J. Sanderson Christison published a pamphlet alleging that the police had quite literally hypnotized Ivens into confessing.

The hypnotism aspect of the pamphlet is a bit unfortunate today, giving the whole thing an air of hocus pocus and pseudoscience. But the transcripts from the cross examinations and interrogations in the pamphlet provide a fascinating glimpse into how the police operated in those days, and it’s clear that the methods they used to get Ivens to confess were, at best, rather questionable. Christison was rather ahead of his time for suggesting that someone could, in fact, be coerced into confessing any number of things just to get out of an interrogation. Criminologists and lawyers today understand far better that false confessions aren’t even particularly unusual.

In any case, there’s never been a “smoking gun” proving that either Higgins or Ivens was innocent, and it’s certainly unfair to suggest that all Chicago cops are/were corrupt. It’s a difficult job that forces you to spend a lot of your time dealing with people at their absolute worst. And just as now, there were good cops and bad cops out there. It goes without saying that we need a strong police force.  But sometimes a story goes around that really does make you wonder who’s watching the watchers.

The Higgins and Ivens cases are covered in more detail in Fatal Drop: True Tales of the Chicago Gallows.