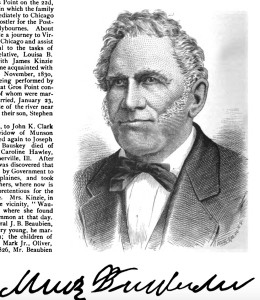 In 1880, the Calumet Club held their annual reunion of early Chicago settlers. Now approaching a population of a million, half a century before Chicago had been little more than a mud-hole, where, one settler remembered, a typical sunday consisted of taking champagne to church to drink the preacher’s health, then hanging around the church door shooting pigeons and prairie hens.

Midway through the reception, a club member informed Mark Beaubien, a settler who was then nearly eighty years old, that someone had requested that he play his violin. Beaubien replied with something to the effect of “I never played the violin. I played the fiddle.”

But one of his old fiddles was produced, and Mark tuned it up, spit on the strings, and played a tune, tapping a table with his foot, while 80 year old men danced reels, just as they had in his tavern nearly half a century before.

At the previous year’s reception, Mark had played them a tune called “The Devil’s Dream,” which seems particularly appropriate, given that his most famous quote is “I keep the tavern like Hell, and I play the fiddle like the Devil.”

This fiddle-playing took place well before there were any theaters or music halls in town – just the tavern attached to Beaubien’s Sauganash Hotel at what is now the corner of Wacker and Lake, just beside the Chicago River. It was, by some accounts, Chicago’s first frame house, but it wasn’t exactly the height of luxury. Anyone who asked for a mattress to sleep on would have been laughed at – Mark rented blankets for fifty cents per night. According to one account, Mark would rent someone a blanket, wait until that person fell asleep on the floor, then take the blanket and rent it to someone else, repeating the trick several times per night.

But it was the fiddle that people remembered. Long into the night, as some danced and some gambled (and some tried to sleep on the floor beneath their rented blankets), Mark would play songs like “Money Musk,” “Indian Solo,” and “Believe Me If All those Endearing Young Charms.”  Notably for the time, the dancers often included people of multiple races. He was particularly friendly with the local Potawatomie Indians.

Long John Wentworth, an early mayor, remembered that Mark was always available for parties, and if his strings all broke (as they sometimes did), he could just hum the dance music.” Wentworth also noted that Beaubien particularly enjoyed singing satirical songs making fun of General Hull, who had ordered the evacuation of Fort Dearborn in 1812. He had been present when Hull surrendered Detroit to the British.

Beaubien died in 1881, survived by just a few of his twenty-three children. The Chicago Historical Society still has a fiddle said to have belonged to him, and a 1930s Tribune article notes than when their museum at North and Clark first opened, there was a recreation of the Sauganash Hotel set up inside of it, featuring a recording of period music made using the Beaubien fiddle and a flute from Fort Dearborn.

The exact provenance of this fiddle is hard to determine – a few early sources state that Beaubien only ever owned one of them, which he bequeathed on his deathbed to Long John Wentworth, who then gave it to the Calumet Club. But that fiddle was burned up in a fire in 1893. The one currently in the museum was one reportedly given to one of Beaubien’s nephews around 1860.