When I was last giving tours, we hadn’t gotten a weird photograph in the alley behind the old Iroquois theatre (which newspapers called “The Alley of Death and Mutilation” after the fire in the theatre that killed over 600 people). But since I’ve started up again, we’ve had several. In particular, we’re getting a lot of odd shadows. One my very first night back at work looked like a three dimensional shadow of a human being. The photographer never sent me that one (it’s possible that once they loaded it onto the computer, a more logical explanation seemed obvious), but here’s a shot by Haley Wittwer from this past weekend. Note the odd shadow at the right: 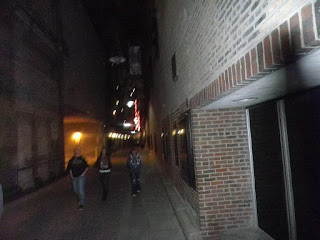 There was no strap on the camera, and, as it doesn’t seem to be adhering to the wall, I don’t think it’s a shadow of anything. As usual, I never hold up anything as “evidence” of ghosts, but I like to post odd shots from the tours here. Shadowy forms are often scene in the theatre currently on the spot (on TV they would call them “shadow people,” but we prefer the less-cartoonish “soft shapes” around here).
Here’s a zoomed-in version of the shadow with the brightness turned up a bit: 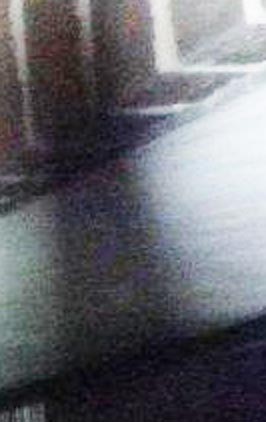 The alley was a grim scene at the time of the fire in 1903. They had built fire EXITS, but the fire ESCAPES weren’t yet complete. Even those that were built were quickly so overcrowded that people went flying over the rails and to their deaths. Some 150-odd people fell to their deaths, while hundreds more died either from burns or from being trampled by the crowd. People in the next building used ladders (and later planks) to provide a means of escape, but it didn’t work so well. Here’s an illustration from the Tribune: 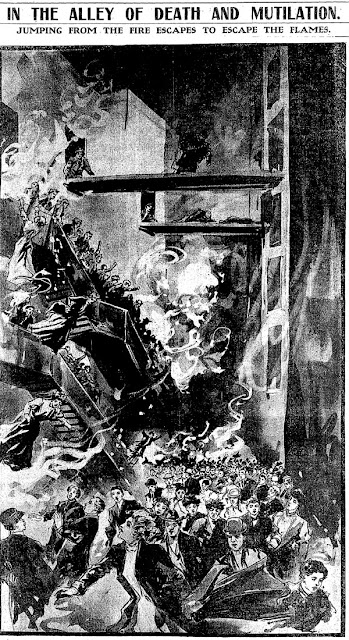