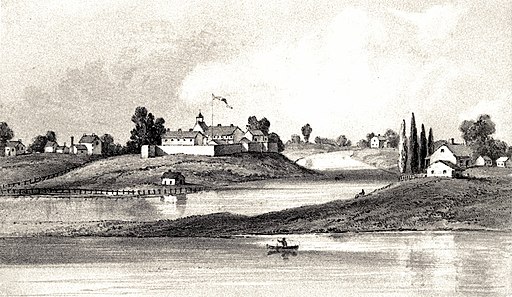 While researching an upcoming article, I noticed something that struck me as odd: a first-hand account of Jefferson Davis coming to Chicago in 1829. I had never heard of the future Confederate president being in the area.

That year, then-Lt. Davis had been stationed at Fort Winnebago, near what is now Portage, Wisconsin, and apparently took a trip down the Fox River. His military career in this era appears to be remarkably poorly documented, but in an 1885 letter to James. D Butler, Davis wrote “When on detached service I think I encamped one night about the site of Madison…Fort Winnebago had been occupied but a short time before my arrival there and I think nothing was known to the garrison about the Four Lakes before I saw them. Indeed, sir, it may astonish you to learn in view of the densely populated condition of that country, that I, and the file of soldiers who accompanied me, were the first white men who ever passed over the country between the Portage of the Wisconsin and Fox rivers and the then village of Chicago.”

That Davis had once been in Chicago was likely never mentioned at all during the Civil War. But in 1881, while seeking out reminisces of Fort Dearborn, and received a letter from General David Hunter. Hunter had lived at the fort in 1829, married a daughter of John Kinzie, and lived as a Chicagoan for decades. Now living in D.C., he wrote the most complete account of Davis’s time in Chicago, published in the May 22, 1881 issue:

“In October, 1829, I saw on the north side of the river, opposite the fort (Dearborn), a white man, and, wondering where he could have come from, I got into a small wooden canoe, intended for only one person, and paddled over to interview him. He introduced himself to me as Second Lieutenant Jefferson Davis, of the first infantry, from Fort Winnebago, in pursuit of deserters. I, of course, was very glad to see Lt. Davis. I invited him to lie down in my canoe, and I paddled him safely to the fort. He was my guest until refreshed and ready to return to Fort Winnebago. This, no doubt, was the first visit of Jefferson Davis to Chicago.”

It’s difficult to know exactly how accurate this is; records seem to indicate that Davis went searching for deserters in 1830, not 1829 though both he and Hunter give 1829 as the date. After more than half a century, it’s reasonable to imagine that both could be a bit off, and, indeed, it’s sort of remarkable that Hunter would remember it at all, except that visitors were probably pretty rare at the time. Also, John H. Kinzie, his brother-in-law, and his wife Juliette Kinzie moved to Fort Winnebago in 1830, and would have known Davis there, which makes it a little more likely that he’d later remember that Davis was the man he’d encountered.

Davis’s Chicago trip, and his time in what was then called “The Northwest,” was little-noted during the Civil War, outside of occasional newspaper items about rumors that a child he’d fathered there with a Menomonee woman was still living in Wisconsin.

Just over 30 years after the encounter, General Hunter would attempt to form an army of “contraband” slaves in Georgia – several months before the Emancipation Proclamation – and Davis would issue an order that, if caught, General Hunter was to be killed at once. Hunter seems to show up in all of the stories I’m researching lately; stay tuned for more articles and podcasts soon!