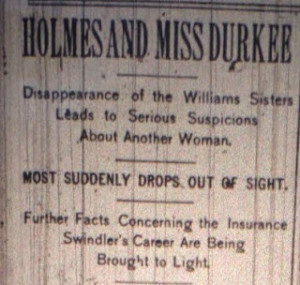 One of the more interesting periphery characters in the H.H. Holmes saga is Kate Durkee, a childhood friend of Holmes’ second wife, Myrta Belknap-Holmes, who was used as a dupe in his swindling schemes. Holmes is usually advertised as “America’s First Serial Killer,” but he was a swindler first and foremost. The stories of him murdering people tend to be exaggerated (his actual number of victims was far lower than people like to say), but people tend to underplay just how accomplished he was a swindler. New Holmes murder stories are rarely dug up, but new swindling tales are uncovered all the time.

Durkee’s name is all over the property records of the “murder castle” property, and when the Holmes story first broke in 1894, some mentioned her as a possible victim, since no one in Chicago had seen her around for a while.

She was alive and well and living in Omaha, and told reporters that on one of her visits to see Myrta, her charming doctor husband had persuaded her to become the titular owner of the building, just as some sort of formality. She signed the paperwork, explaining to reporters that she didn’t have much of a head for business.  In 1892, a drug company suing Holmes to get a lien on the property determined that Durkee wasn’t a real person, and Holmes and his lawyer, D.T. Duncombe, went clear out to Omaha so that she could be interrogated.

In 1896, she came into the news again when Holmes confessed to having murdered Kate Durkee in his famous confession. She was still alive and well and living in Omaha, and issued a statement that “I have never been murdered – not by HH Holmes or by anyone else.”

Though I always loved that “I have never been murdered” quote, her willingness to sign that paperwork always made her seem a bit like a regular old dupe to me (not that there’s any real shame in it -plenty of very smart people were duped by HH Holmes).

But in one of my recent dives into the lawsuit archives, I cam across the Morrison Plummer Drug Co.’s lawsuit against Holmes, which included the full transcript – pages and pages – of her interrogation. And I LOVE it – she comes off as a regular Black Window.  It’s rare that you find full transcripts like this in lawsuit archives, rarer still that they’re typed and legible, and rarer still that they’re as entertaining as this one is.

Here’s a brief excerpt I typed up in order to do a dramatic reading; I “performed” it on the Pretty Late with Patti Vasquez show the other night with songwriter Aly Jados playing the role of Kate Durkee. You can listen to it here; I come it at about the 1:13:00 mark.  It’s edit a bit from the original for clarity. 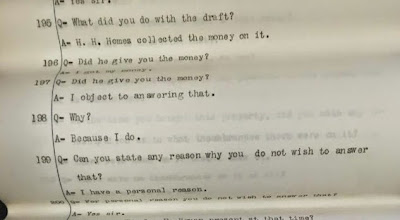 LAYWER: How Long have you known Mr. HH Holmes?

Are you now possessed of any property?

I object to answering that.

Have you any reason to decline to answer?

What is the reason?
I shall not answer that either.
Have you in the last two years possessed any real estate in Chicago?
Yes, sir, the Wallace Street Property.

Have you a deed for that proprety?

I HAVE had.
Who handed the deed to you?
I object to answering that.

I object to answering THAT, even.

To whom did you sell this property?

Did you ever see him at all?
No, sir not personally. The whole agreement was arranged by HH Holmes.
What did he pay you?

Did HH Holmes give you the money?

I got my money

But did HH Holmes give you the money?
I object to answering that

Because I do.
Did you look up whether there were any encumbrances on the property?
I had my agent look it up.
Who was your agent?
I cannot answer that question.
Why?
Because I do not wish to.
Do you know that we claim in this case that you never truly owned the Wallace street property?
I suppose I do?
Do you not see how important these questions are?

I am not obliged to answer them if I do not wish to.

Durkee never met HS Campbell personally – it was one of Holmes’s aliases under which he conducted a lot of “castle’ business.

She died almost exatly three years after Holmes was hanged of causes currently unknown; a woman dying in her 40s isn’t necessarily unusual for the era, but I suppose we can add her as a possible victim of the Holmes Curse that reporters talked about a lot in those days. All I know about her death comes from a brief “thanks for the sympathy” note published by her brother in an Omaha paper (right) and a gravestone in Omaha.  (2016 update: it was heart disease). For more on the curse, check out the ebook:

One thought on “Kate Durkee: Victim of the HH Holmes Curse, or Total Badass?”