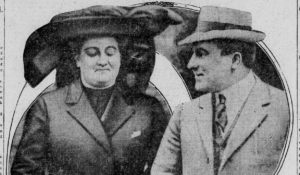 Often, in pulp stories about the 1920s serial killer Tillie Klimek, she was said to have been a “psychic killer.” They say that she used to predict the deaths of family members, and her future victims, which one can imagine would have made her a real hit at parties.

For the longest time, I assumed that this angle was either pure fiction, as it was never a part of her story in the 1920s, or, at best, really exaggerating the story that she’d gleefully told one of her sick husbands that he was definitely going to die. She knew he was dying not because of anything supernatural, but because she’d given him arsenic.

However, I now think that it may just come from people mixing her up with Louise Lindloff, another Chicago murderer from a decade earlier who really DID work as a fortune teller. That she’d loudly and accurately predicted the deaths of some of her family members/victims was confirmed by several witnesses in her trial, and she even told a reporter that she’d predicted the death of a neighbor when she was a little girl back in Germany. “That,” she said, “was when I got my first whipping.”

Louise has never been studied in depth; she’s been in a couple of blogs and mentioned briefly in a book or two, but somehow, despite the weird and sensational angles of the case, the story didn’t make it into many pulp anthologies of Chicago murders in the mid 20th century, and ended up mostly forgotten. Even Coroner Hoffman, who retold several of his best stories as an old man in the 1930s, apparently didn’t tell of the time he pretended to be a psychic to get into the home of Louise Lindloff.

After the death of her teenage son in 1912, on the heels of the deaths of two daughters and two husbands, neighbors and doctors alike became suspicious. Though the causes of death had appeared to be natural, the doctors also recognized that they resembled cases of slow poisoning. Coroner Peter Hoffman journeyed to her house at 2044 S. Ogden (now part of the medical district), pretending to be a famous spiritualist medium and asking for a chance to try out her crystal ball. A fortune teller by trade, recent changes in laws had forced Louise to switch her business to electro-therapy (basically shocking people for fun and profit – any health benefits they got were probably a coincidence). But she remained a firm believer in the spirit world, and her crystal ball was her prize possession. She told anyone who’d listen that she’d paid $500 for it (about 15k today), and that it contained a genuine tear from the eye of Cleopatra.

Hoffman sat down at the ball, gazed into it, and said that he saw the spirits of her two husbands, two daughters, and son, standing to her right. “They are accusing you of killing them,” he said.

“You lie!” Mrs. Lindloff shouted. “They are standing to my left, and they are saying that I am innocent. If they were at my right, I would be guilty.”

With that he began to question her, and eventually arrested her for the murder of her son. Only recently she had sent the boy to an insurance office, where he’d been instructed to lie about his age to get a better policy. Louise was the benefactor.

Louise, it seems had been at this for some time. After experimenting with arsenic on dogs (according to a neighbor), she’d poisoned her husband for the insurance money. Her children and her next husband had died in short order, as well as a few others around her. Investigators worked out that she’d get an insurance payout, figure out how long the money would last, and then arrange to kill again when it was about to run out. At the time of her arrest, she said she was down to her last thirty bucks – but she’d just arranged to take an expensive vacation, and had bought a disguise to wear.

She was taken to jail, where she continued to talk about speaking with spirits (though she took a break on the fourth of July to play “soccer football” in the courtyard, where other prisoners included Mrs. Conway, who’d helped Conway the Clown commit a murder recently). In court, she was represented by George Remus, father of Romula Remus, who was the first to play Dorothy in an Oz movie, and who went on to be a big bootlegger in the 1920s. He’s pictured with her at the top of this page.

If the fortune telling was just an act, she never dropped it for a second. While one witness after another told stories of her predicting the exact day her various family members would die (and others told stories of her coming up with other ways to defraud insurance companies), she confidently said that the spirits had assurred her that she’d be acquitted. However, the sheer amount of arsenic they found in the liver and kidneys of the bodies that were exhumed were considered very strong evidence. So was the testimony of her maid, who said that Louise’s son complained that the water his mother brought him to drink was “sandy,” and neighbors who noted that when her husbands were sick, Louise refused to give them medicine from the doctor, preferring to mix up her own. Others said that she’d worked at a drug store in Milwaukee for a while, and was highly interested in deadly poisons. One neighbor was certain she’d tested poisons on dogs; another said she’d poisoned dozens of chickens (a common trope in serial poisoner stories from this era was that the poisoners were said to have tested their mixtures on dogs, hoboes or babies).

The spirits were wrong – she was convicted and sentenced to twenty-five years in prison.

The press was convinced she’d eventually be acquitted on appeal – not because the evidence was lacking, but because no woman had ever been convicted of murder in Chicago. Her case was still pending appeal when she died of cancer in 1914.

Now, it’s worth noting that there’s a tendency to assume the worst about the “black widow” murderers of the 1910s and 20s. There are a couple of blogs that cover her, Louise Vermilya, Jane Quinn, and other accused murderesses (who were acquitted) as serial killers, usually as part of an overall strategy of “proving” women are evil and that men are the real victims in this world (ugh). And Hoffman certainly believed that there were LOTS of women killing their husbands in those days – he spoke of it frequently. It may be that in Louise, he found someone to hold up as proof of his theory, whereas some of the others he arrested for the same crimes couldn’t be convicted (arsenic murder was hard to prove). The misogyny in some of the newspaper reports almost drips off the page. One headline even refers to Louise Vermilya, in prison for similar crimes at the same time, as “Louise Vermilya, Ugly and Squat…”

But the evidence against Louise Lindloff was awfully strong; the undertaker said he hadn’t used arsenic on Louise’s son. And unlike the others, she was convicted. Police at the time suspected her of as many as nine murders, which would put her right on par with HH Holmes in terms of actual known victims.

Alma Graunke, teenage daughter, officially died of heart trouble after too much dancing, 1911