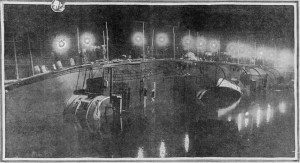 This week marks the 100th anniversary of the Eastland disaster, in which a badly-oversold boat capsized in the Chicago River, leading to the deaths of 844 people. This week I’ll be featuring posts about it daily, culminating  on the anniversary on Friday with a set of rarely-seen photos that I don’t think have ever been online before.

The Second Regiment Armory (now the southwest portion of Harpo Studios).  It was the largest of several morgues used to house the 800+ bodies after the disaster. There were several such buildings used  Here’s my “cheat sheet” of morgues mentioned in papers, besides the Armory and Armory Annex:
912 West Madison – Sheldon’s Undertaking (also vacant store in a building next door)
Reid Murdoch – floor 1 and basement
PJ Gavin’s, 642 N Clark (3 bodies)
Western Casket Co, 90 E Randolph (29)
Central Undertaking, 318 Federal (8)
Carroll’s, 822 N Clark (9(
Arntzen’s 810 N Clark (9)
Bradley’s (1820 W Harrison) (1)
Malonev’s, 1004 N Wells, 3
Sbabaro’s, 708 N Wells 1
Note: there is an urban legend that many were housed in the Chicago Historical Society building, later the Excalibur Club, but it’s just that: an urban legend.
It’s difficult to imagine how hard it must have been for the survivors to examine body after body, looking for their loved ones. But, if you think about it, you can easily imagine how mistakes could be made. There were several stories about bodies being identified as multiple people over time. A Tribune article from 7/28 states that in the morgue at 912 W. Madison, a young boy entered the premises saying he was looking for Mary Morgan. Police told him she’d already been identified by her father and was now at home, but he told them the body at the Morgan home was not Mary’s.  He turned out to be right. Mary’s father had identified the wrong girl. The body had been distorted, but resembled his daughter. Eventually, the real Mary was found, and the girl initially claimed became body No. 571. A Trib article from August 2nd said she was still unidentified. An August 19 article in a Duluth paper says that she had finally been identified as Ann Straka, age 22. Another body had already been buried as Anna Straka; it was exhumed and re-identified as Emma Meyer.
Here’s the Evening Post on one such incident, which segued into a story about another sad scene in the armory:
SAD RIVALRY MARKS HUNT FOR BODIES
–
Eagerness for Remains of Loved Ones Lost in River Tragedy Leads to Double Identification of Some of Dead

A long, silent, sorrowful line of men and women moved slowly into the Second Regiment Armory at Washington Boulevard and Curtis Street today. Those in line wore set features – features that had been molded by a great grief.  The tears of Saturday had worn themselves into the flesh. The first grief at the loss of dear ones now bordered on anguish lest they be denied even the possession of the bodies of these dead ones. And it was the faint ray of hope that in the long row of unidentified of the Eastland’s dead might be the bodies they sought that buoyed up the spirits of the sorrowing multitude and averted utter despair.

To the beholder of the silent procession and the pathetic scenes that moved even the strong-hearted policemen who stood guard there was left no doubt that if in life a child, or a mother, or a wife is dear, then, indeed, in death is the body of that loved one the most highly-prized possession that is left.
The pathetic rivalry that attended the claiming of bodies demonstrated this. As the number of unidentified dead grew smaller, those who had tramped from morgue to morgue thru two long days and nights grasped at the slightest sign, and the result was mistakes in identification.
As body after body was identified it was taken from the row past which the sorrowful line was guided by the police and removed to another row to await the call of the undertaker. In order to handle the great throng more easily, the mourning relatives and friends of the missing river victims were guided away from the row of the bodies that had been identified. Yet, time after time, despairing relatives, failing to find their dear ones in the first long row, broke past the police and made their way frantically to the covered bodies of another part of the large armory floor.
It was such an instance as this that brought a second identification of the body or a woman. A group of women had passed the long row two or three times. Each body they examined closely, fingering the bits of garments that had escaped the rush of the river. One of them stood despairingly for a moment, then her eye fell upon a pair of suede shoes that protruded from beneath a blanket that covered a body which had been identified yesterday. She pushed her way past the police and knelt at the side of the body.
“Let me see the buttons on her waist. I will know those buttons,” the woman shouted. Then, as the blanket was pushed aside and she saw a peculiar little jeweled button, she cried out: “This is Josey! This is Josey!”
The police were perplexed. The body was awaiting transportation to the home of relatives who had made another identification. The woman who knelt at the side of the body was Miss Clara Dolezal. She claimed the body as that of her cousin, Mrs. Josephine Sindelar of 4537 West Jackson Boulevard. Already had the bodies of the husband, George, and four children been identified at other morgues. A fifth child is still missing. The entire family of six went down with the ill-fated boat.
“Can’t you open her mouth?” Miss Dolezal finally asked. “I am sure of the shoes and the buttons, but if you doubt me, look into her mouth. Josey has two small rims of gold on her front teeth.” The mouth was opened and there were two narrow rims of gold.
“The identification is positive,” a policeman said. “The other identification must have been a mistake.”
“Oh, don’t let the body go,” pleaded the woman. She was assured that the body would be held.
There were other equally pathetic, heart-rending scenes in the wide space of the armory floor.
Anton Thies, 1535 Tell Place, accompanied by two young songs, Arnold and Max, stopped suddenly beside a body of a young girl. Without a moment of sleep or rest since the first report of the sinking of the Eastland, Mr. Thies had been walking from morgue to morgue, and passing long rows of bodies. Late Saturday, he found the body of his 17 year old daughter, Agnes. His search went on for another daughter, Clara.
As he removed the blanket from a part of the body and looked at it for a moment, the man’s eyes filled with tears. It was his deep grief, mingled with a vague sort of joy, thought brought those tears. He had found the body of Clara. The two boys collaborated the identification.
Then the determination that had lent the man strength during his long search gave way to an overpowering of grief and he stood at his child’s side, weeping. “Oh, my Clara, my Clara,” he wailed. “She would be alive today if she had not been forced to go on that excursion.”
Asked what he meant, Mr. Thies explained, “Clara went on the excursion a year ago and she did not want to go this time because of the crowd. But she was forced to go. ‘I don’t want to go, papa,’ she said to me on Friday evening, ‘but I have to go. The boss told us we have to go. I won’t have a job anymore if I don’t go.’ Yes, she was forced to go to her death. She seemed to be afraid that something was going to happen. I can take you to a hundred girls that will tell you that their bosses forced them to go to the picnic. Clara worked for a foreman named Peterson.”
(Visited 475 times, 1 visits today)

One thought on “Mistaken Identities at the Eastland Morgues”