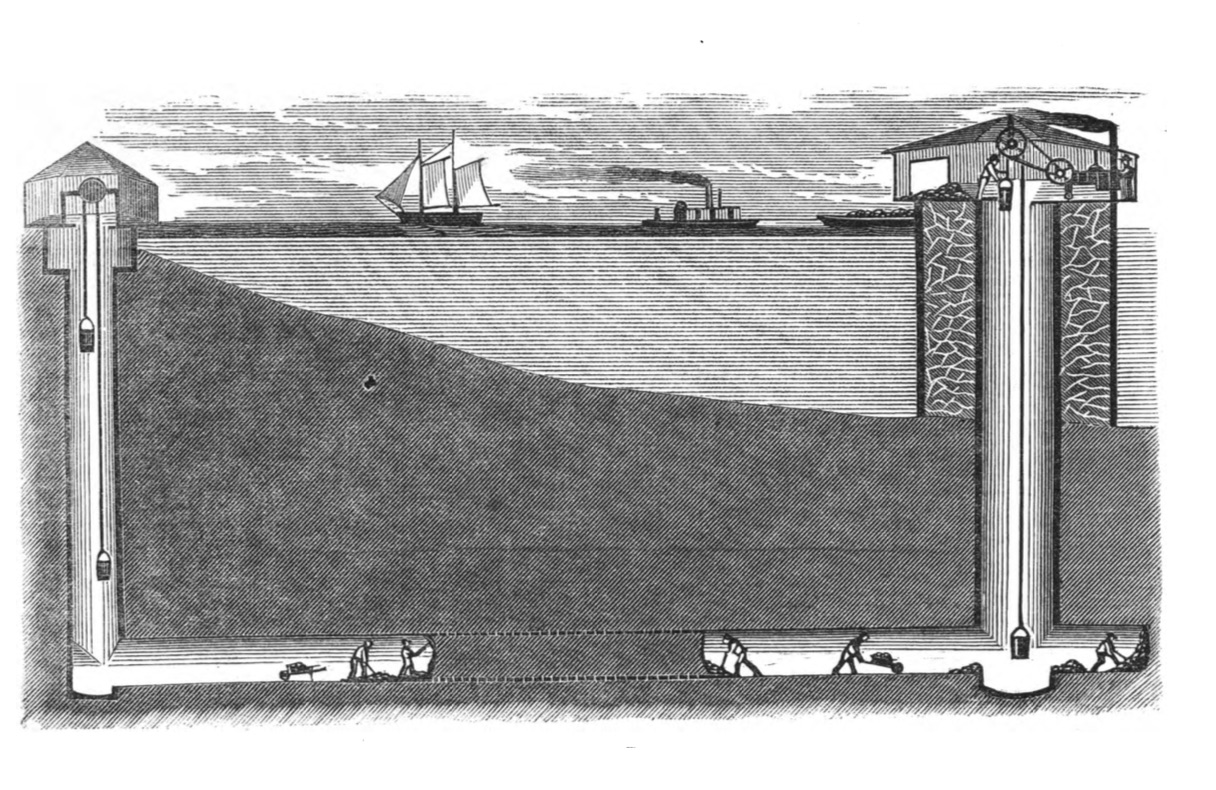 Urban folklore in Chicago is full of stories of the city being cursed – most of which have little basis in fact. One often hears that Cap Streeter cursed the Streeterville area on his death bed (if it happened, no one wrote it down at the time), or even that Potowatomi Indians did a “ghost dance” on the present site of Hull House to curse the white man after the Battle of Fort Dearborn (I don’t even know where to begin saying what’s wrong with that).  Left out, though, is the fact that for seventy-odd years, much of Chicago’d drinking water flowed through a murder site on the way to our faucets – the sort of thing that seems like it OUGHT to inspire a curse story.

Chicago’s reputation as a “murder” town is an old one. As early as 1858, the Chicago Times wrote “Another murder! The word has become so familiar to the ears of our citizens that it would seem scarcely adequate to excite their wonder. Murder is growing common in Chicago!”

In the late 1850s, though, murder was a relatively minor problem – the article in question was talking about a sixth accused murderer being taken to the jails, but that year cholera was killing off hundreds of people per year. And, though they only barely understood it at the time, part of the problem was the disgusting drinking water taken from the mouth of Lake Michigan, which was mingled with all of the city’s sewage and waste.

In the early 1860s, civic engineers determined that they could solve the problem by getting the drinking water from two miles out, where the water was clearer, and in 1864 construction was begun on a tunnel beneath the lake, running from the famous water tower to a “crib” far out in the water. Though not nearly as well known as other feats of the day, such as the Brooklyn Bridge, the two mile tunnel was every bit as remarkable and important a feat of engineering. And, though one still hears almost constantly that cholera epidemics in the 1880s were killing off 10-20% of the population, those stories are outright myths. The lake tunnel didn’t end lake pollution, but it helped a lot.

Few seemed to notice, or care, that the drinking water flowing through that tunnel was going right through a murder site. On August 25 of 1864, the Times announced that “about 12 o’clock on Tueday night a shocking and horrible murder was committed at the lake tunnel! A miner named Patrick Hunt was stabbed in the neck with a file in the hands of Michael Corry, and received a wound, the result of which was almost immediate death.”

Patrick Hunt and Michael Corry (or Carry, in some accounts), it seems, got into a fight over reports of how much work each of them was doing, and came to blows down in the tunnel, lit only by a lantern ten feet away. Witnesses heard Corry say something to the effect of “Let’s go up on land and fight it out,” to which Hunt agreed – but as soon as Hunt’s back was turned to head for the shaft, Corry attacked. Witness E.W. Offerman went down the shaft, where Corry, bleeding from the mouth from a blow by Hunt, was dragged to mouth of the tunnel. Corry, all the while, shouted “murder! Murder!” and Offerman shouted that Hunt had murdered Corry. But it was Hunt that received the worst of it – another worker found him slumped up against the tunnel wall, “struggling in the last agonies of death, with the blood pouring in torrents from a ghastly wound in his neck.”  The file, missing its handle, had been wiped clean of blood and tossed about four feet from the shaft that lead down to the tunnel. Hunt died within seconds, and Offerman, immediately seeing that Corry was the killer, nearly took the file and attacked him in retaliation.

But cooler heads prevailed, and Corry and the corpse were both taken the the North Market Station House. After an inquest, Corry was taken the the jail, which would have been in the old courthouse where City Hall now stands. Crowds gathered to see the body, and, according to the Times, it took great effort on the part of the police to stop crowds from attacking Corry.

From the coroner’s report published in the Times, we see that Hunt, 34, a native of Ireland, left behind a wife and three children who lived on the west side; the coroner’s jury said he was a man of good character who only rarely drank. Corry, 28, was of Irish descent as well, but born in Pennsylvania, and had lived in Chicago since February of 1863, and, though he had been “a regular, faithful and steady man” since getting the job, he was “represented as being of an excitable and quarrelsome disposition, and as being addicted to the use of liquor.”  Witness Herman Kraschell said he’d seen Corry drunk many times, though he seemed to be sober at the time of the murder.

Four months later, in December, he was indicted for murder, though no digitized paper ever seems to have offered any further news on the case. It’s possible that the final disposition of Corry is buried in a microfilm reel of an 1865 paper, but, as those can’t be searched by text, finding the article would largely be “luck of the draw.”  From my own files, I see that the Times didn’t follow up much on the story; Fall of 1864 was approaching, and by the very next day editor Wilbur F. Storey was too busy bad-mouthing Abraham Lincoln and peddling conspiracy theories about the impending election to worry much about local matters. Given the accounts of Corry’s own injuries, it’s likely that he managed to establish that his attack was in self defense.

It seems odd, really, that this didn’t become more of a part of Chicago folklore, as it seems like a ghost story or curse story waiting to happen; if you’re the sort to think the Streeterville area is cursed, or that the water tower is haunted, this is probably just as good an explanation for it as any of the mythical stories that have gone around – at least in this case the history behind it is real!

The tunnel was in use until 1936, but the murder was forgotten almost as soon as it happened, and only recently started to rediscovered, having been retold in a couple of books on the Lake Tunnel, most recently Benjamin Sells’ excellent The Tunnel Under the Lake: The Engineering Marvel that Saved Chicago.