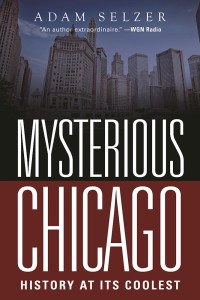 The new Mysterious Chicago book is in stores today, Oct 26, 2016! There is a launch party tonight at Anderson’s Books in Naperville at 7pm, though if I knew I’d be competing against a cubs World Series, I might not have scheduled it like this!

Featuring dozens of unsolved mysteries from Chicago’s gruesome history, many of which have never been retold since they first made the papers over a century ago, including:

Find it at your local independent bookstore today, or click a link below:

2 thoughts on “New Book: Mysterious Chicago – History at its Coolest”