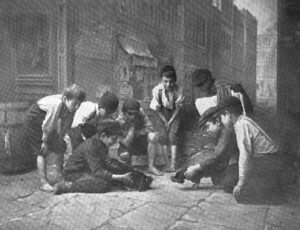 In 1899, a Michigan reporter who visited Chicago said that “Those who are desirous of studying human nature in embryo in all its phases should spend one day in Newsboys Alley. The noblest and the lowest traits of man may be found there. From before daylight till after dark they swarm like bees…They fight, and play, and trade, and swear, and gamble. Italians, Jews, Turks, Swedes, Negroes, Germans, Poles, Russians, (and) Americans all mix together indiscriminately.”
Newsboys Alley was Calhoun Place, in between Wells and LaSalle, running along the back of several newspaper offices. People who made their living selling papers – mostly kids, and mostly boys – would gather at all hours to get their supply to hawk on the streets, and to socialize and gamble (craps games were said to run constantly). There were a couple of rooms with straw on the floor and wooden benches along the wall where they were allowed to sleep, as many were homeless. Though many actually came from well-to-do homes, the newsboy community was largely a society of children who lived almost entirely free of adult supervision. They were largely uneducated, but somewhat self-sufficient. They spoke what many reporters described as their own language – a mixture of underworld jargon and phrases borrowed from the many languages they spoke, in pronunciation that rendered “Extra” as “Uxtry.” Such care and education as they got frequently came from charity; many could sleep and attend night classes at the Waifs Mission, and George Dewey, the policeman who patrolled the alley, regularly had to buy shoes and coats for the boys in the winter, and taught a great many to read. Even in studio portraits, many are running around barefoot.
I’ve never seen a really good photo of Newsboys Alley – the closest are a few realistic fakes made by photographer J. Ellsworth Gross in the first few years of the 20th century. A noted photographer, Gross made several studies of newboys on the street, but after he fell down an elevator shaft in the Fisher Building, he was no longer mobile enough to handle street photography downtown. But he was fascinated by the newsboys, and didn’t want to quit taking pictures of them. “They are a mighty interesting study,” he told the Chicago Daily Inter-Ocean. “They are the strongest and rankest little trade unionists you ever laid eyes on.” When he once suggested that some of them take up shoe-shining on the side, one told him “What do you think we are, scabs? If you want your shoes shined, go to a parlor. We ain’t trying to cut out their business.”
Hence, he built a studio in his barn near 36th and Michigan and sent an artist friend to Newsboys Alley to paint him a reproduction of it on a series of blankets, then brought in actual newsboys to pose in his simulation of the alley.
The photos he took were highly regarded, but hard to find now – a 1908 fire cost him all of his archives and negatives. While several of his portraits can be found online, the newsboy studies exist mainly in copies printed in magazines and newspapers, including the one at the head of this article, which was in The Camera magazine in 1910. He had recently taken a portrait of a young man who mentioned that he grew up in Chicago, and said “I like noisy old Chicago, but this is my first visit after many years. I used to be a newsboy here.” As soon as he said it, Gross recognized him from the picture, and showed it to him. “Well, I’m blowed if that ain’t me right there!” he said. “We were a true-blue bunch, too, I can tell you. And we had a…slogan to govern our little band. If a kid wasn’t acting right or toting square, all you have to say was, ‘Be a good sport!’ and he was all straight in a minute.”
The newsboys may have been the most diverse group in the city, but it would be exaggerating if we said they were exactly progressive. Most of the newsboys had nicknames, and the greater number of them were highly offensive – racial slurs, references to physical handicaps, etc. You can only expect a group of unsupervised children, particularly from a century ago, to be so polite.
The lights were turned off in the alley in 1918 when the old Chicago Herald office closed down – articles at the time said that it had been lit 24 hours a day for the past fifty years. After that, it faded away as a meeting places. The J. Ellsworth Gross pictures that survive – grainy copies though they are, and with a recreated background – are probably the best shots we have of what life in Newsboys Alley was like.  Besides the one at the top, here are a few more shots:

Newsboys Alley – or the space where it used to be – is featured on most of our “Architecture of Mysterious Chicago” walking tours.