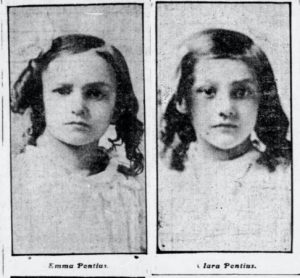 This year, I had the distinct honor of running the “Haunted History” tours at the Lincoln Park Zoo, which gave me a good opportunity to research some interesting aspects of the Zoo that I didn’t know about, search as zoo director Marlin Perkins’ search for the Yeti. And, of course, the ghost stories.

In the 1890s, Lincoln Park was widely regarded as the most haunted spot in town. It had been a cemetery within living memory at the time, but that was seldom mentioned as the origin of the park’s ghosts. The Tribune wrote that “there have been violent deaths enough to furnish a ghost for every shadowy nook.”

In particular, many pointed to the High Bridge over the lagoon, which was widely known as “suicide bridge.” Exact figures for how many people jumped off of it are not known, but 100 over its roughly 30 year existence (from the early 1890s to 1919) seems about right. Its reputation as a place to do away with oneself was such that not everyone even chose to use it for jumping; some went there to shoot themselves or hang themselves.

One ghost story I heard from zoo employees was that a little girl was sometimes heard crying in the middle of the night near the north end of the zoo. Now, it’s worth noting that zoos are FULL of noises that could lead to mistaken identity, but the story goes that one employee was so disturbed by the sobs that she quit her job.  The location was near enough to suicide bridge that I felt that it was worth looking to see if a historical story might be connected to it. 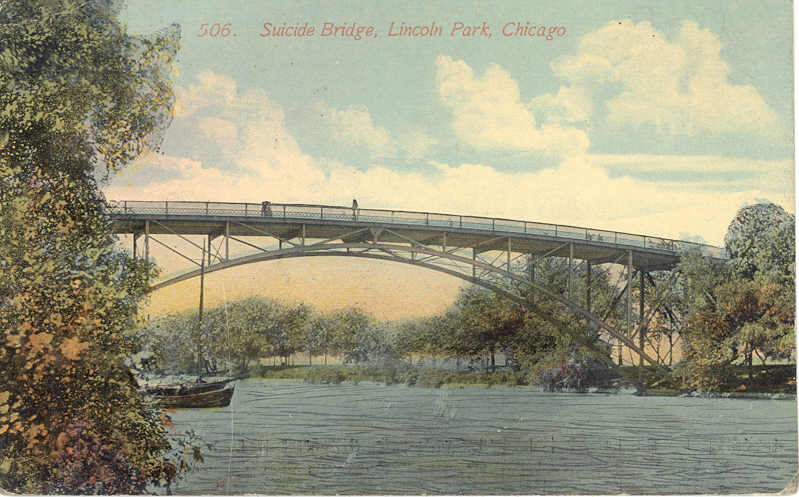 I did have some vague recollection of an article in which a boy had been begging his sisters to “stay away from Suicide Bridge,” and pulled it up to find a real heartbreaker of a story (with a photo, above, that is probably the saddest, and, let’s be honest, spookiest, photo I could possibly find).

It was 1907. Two young girls, Emma and Clair Pontius, ages 12 and 10, fell from the bridge into the lagoon. At first, it wasn’t noticed for some time, as it was thought that there were no witnesses. After the bodies were found, their father and stepmother speculated that one of the girls had fallen, and the other had jumped in after her. Their grandmother, though, had a different theory: she said the girls had been suicidal over their mother’s death and their stepmother’s treatment of them, and had spent the day at their mother’s grave at Graceland before going to Lincoln Park, away from which their brother, superstitious about the bridge, had begged them to stay. 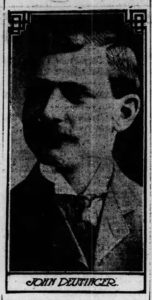 It was eventually ruled an accident, but a witness, a young boy, emerged with a detail that seems to me to establish that it was likely suicide: the girls hadn’t screamed. One had simply slipped in, followed by the other. He also added another detail: that a man had gone into the water to save them and never returned. It was several days before the third body, later identified as John Duetinger, was found.  Duetlinger had spent two years recovering from a nervous breakdown, and was in the habit of walking in the park every day. An expert swimmer, he had saved a child from drowning in Douglas Park the year before.

Now, whether this really led to the sound of a crying girl being heard near the bridge site is impossible, but I always like it when someone tells me a ghost story and I can connect it to something historical. Another example at the zoo is a ghostly woman who is said to haunt the women’s bathroom at the Lion House.  In 1912, when another bathroom in the park was renovated, it was announced that their would be an attendant hired in both the mens and womens’ room; the man would be paid $55 a month, and the woman would get $50. Now, statistically, that’s a bit ahead of the “pay gap,” but if I were that woman, I’d probably want to haunt the place myself!

I plan to be back to run the zoo tours again next year. See ya there!