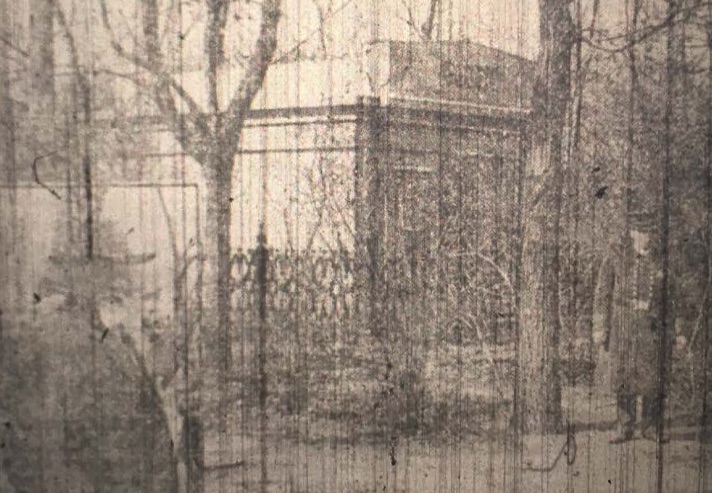 A few weeks ago I was contacted by Rachel Williams, a great great great grand-daughter of Ira Couch, the man whose family tomb still stands in Lincoln Park, and the subject of one of our early podcasts. She had seen my recent post about “tomb snooping” and documenting the door behind the door, which is as far into it as we can see anymore, and offered to share some old family documents with us – we recorded a portion of our time geeking out for this new podcast!

We’ve spoken about the tomb, the last noticeable vestige of City Cemetery, before, with such posts as “Who’s Buried in Ira Couch’s Tomb? New info” and More Couch Tomb Info (Probate Files, etc), as well as an early podcast.  Most of the gravestones and many (though certainly not all) of the bodies were removed when the cemetery became Lincoln Park after the Civil War. No one is entirely sure why the Couch tomb wasn’t moved, but it was probably simply a matter of the city not wanting to spend the $3000 masons said it would cost – you can find more info on the tomb and the cemetery over at Pamela Bannos’ Hidden Truths website.

We expected to see a scrapbook with newspaper articles, and found that and SO much more. Ms. Williams (who was great fun to talk to!) had a huge stack of letters, checks, telegrams, articles, legal documents, and more. Much of it related to the Couch estate and bankruptcy suit from the 1880s, and with the management of the Tremont House hotel (the wine stock list I posted the other day was among the stack). This was traveling mystery solvers’ heaven!

And so we sat around the table and absolutely geeked out, and had a fantastic time! Listen in on the podcast at archive.org,  or on feedburner (scroll to the bottom), or via iTunes , where you can subscribe for free. Or just listen on this nifty little widget:

What we didn’t find, of course, was the answer to the riddle of who all is in the tomb, if anyone. There were some new articles and reports, but they just further confuse the matter. One witness said that he looked through the iron bars once and only saw one coffin, but the others might have been behind slabs (it was apparently set up with notches on the wall for 10 coffins, with a slab for another in the center, though descriptions of the inside are a bit at odds with each other). How he saw behind the second door is ayone’s guess – maybe it was open at the time?

In the same article, William H Wood, a trustee for the estate (Ira’s brother-in-law) said that several Couch family members are there, including Ira’s parents and wife. But he doesn’t mention that he had a kid of his own in there (according to his son Frederick in the 1930s), and seems oddly unaware that Ira’s wife wasn’t dead yet. Perhaps the reporter transcribed something incorrectly?

The city occasionally claimed (in the late 1800s and early 1900s) that there were no bodies in the tomb at all, but the family has always disagreed. The fact that the family seems to have discussed putting James Couch there in 1892 indicates that if the bodies were removed, the family wasn’t notified, which was probably not legal. 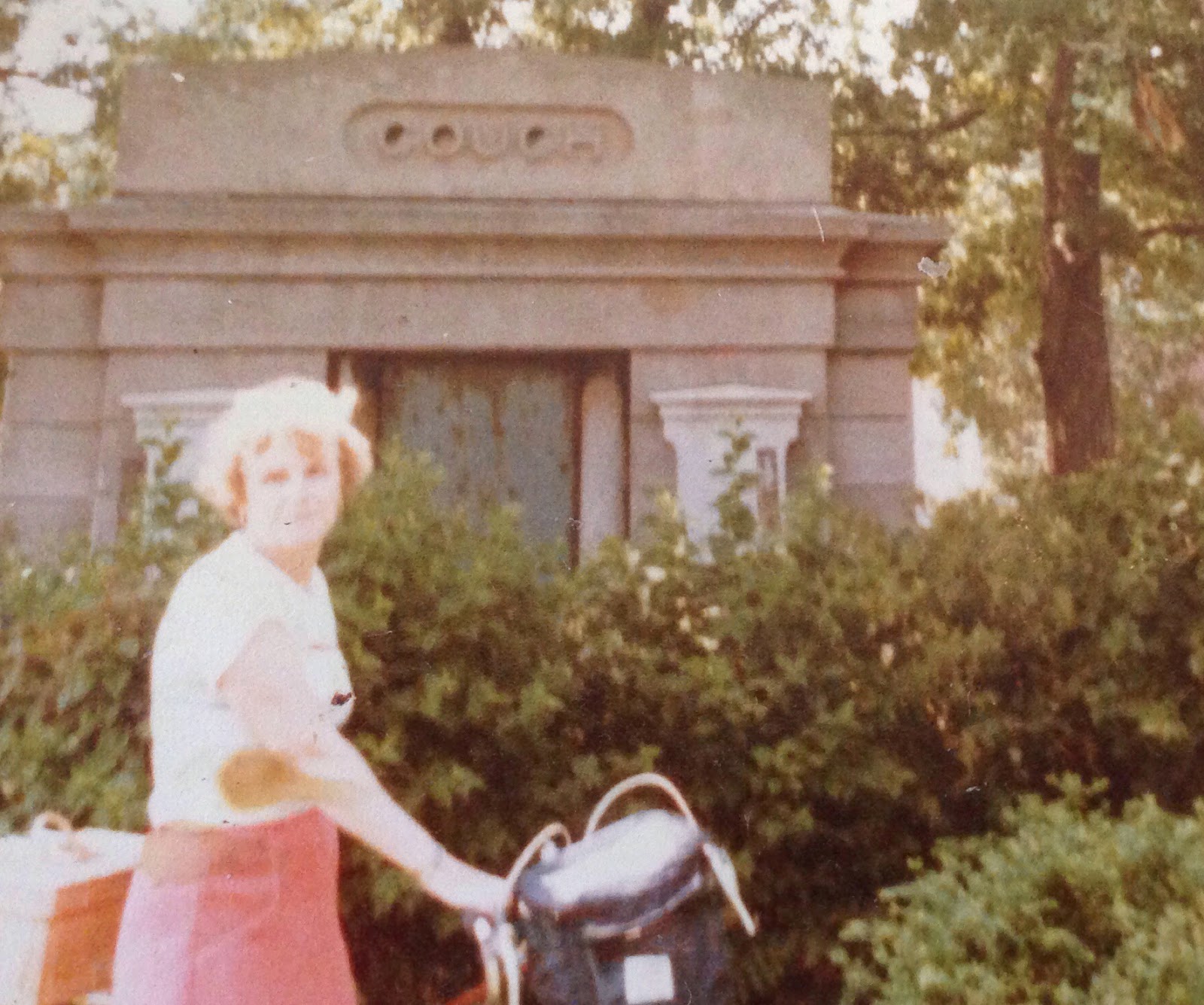 Rachel’s mother (Ira’s great great granddaughter) in front of the tomb in the 1970s. No one is sure when the current door (which is greenish here and black today) was put in; pictures of the tomb from 1960 indicate that it may have still just been iron bars on the front at that point (as in the etching above). 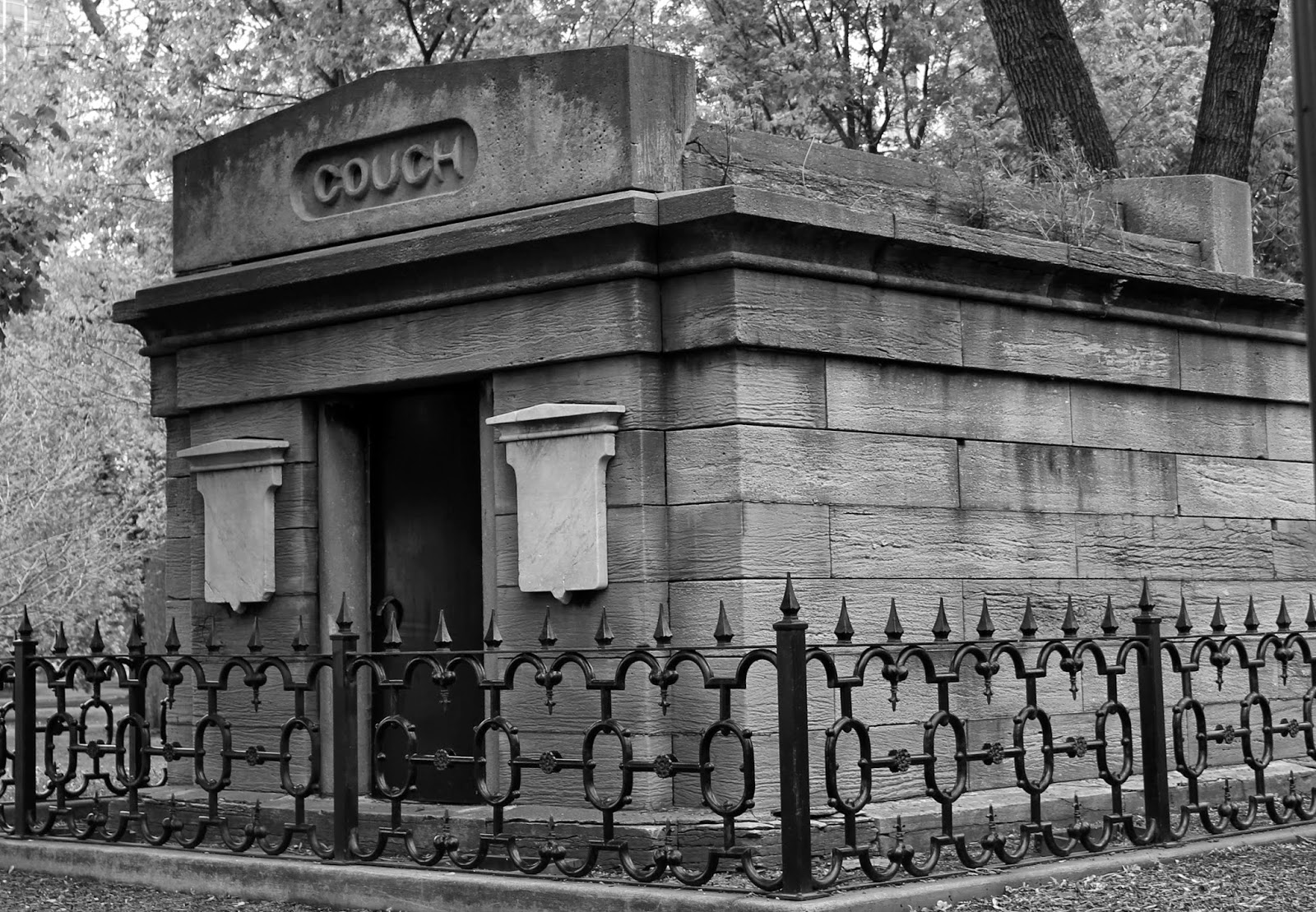 The tomb as it appears today. 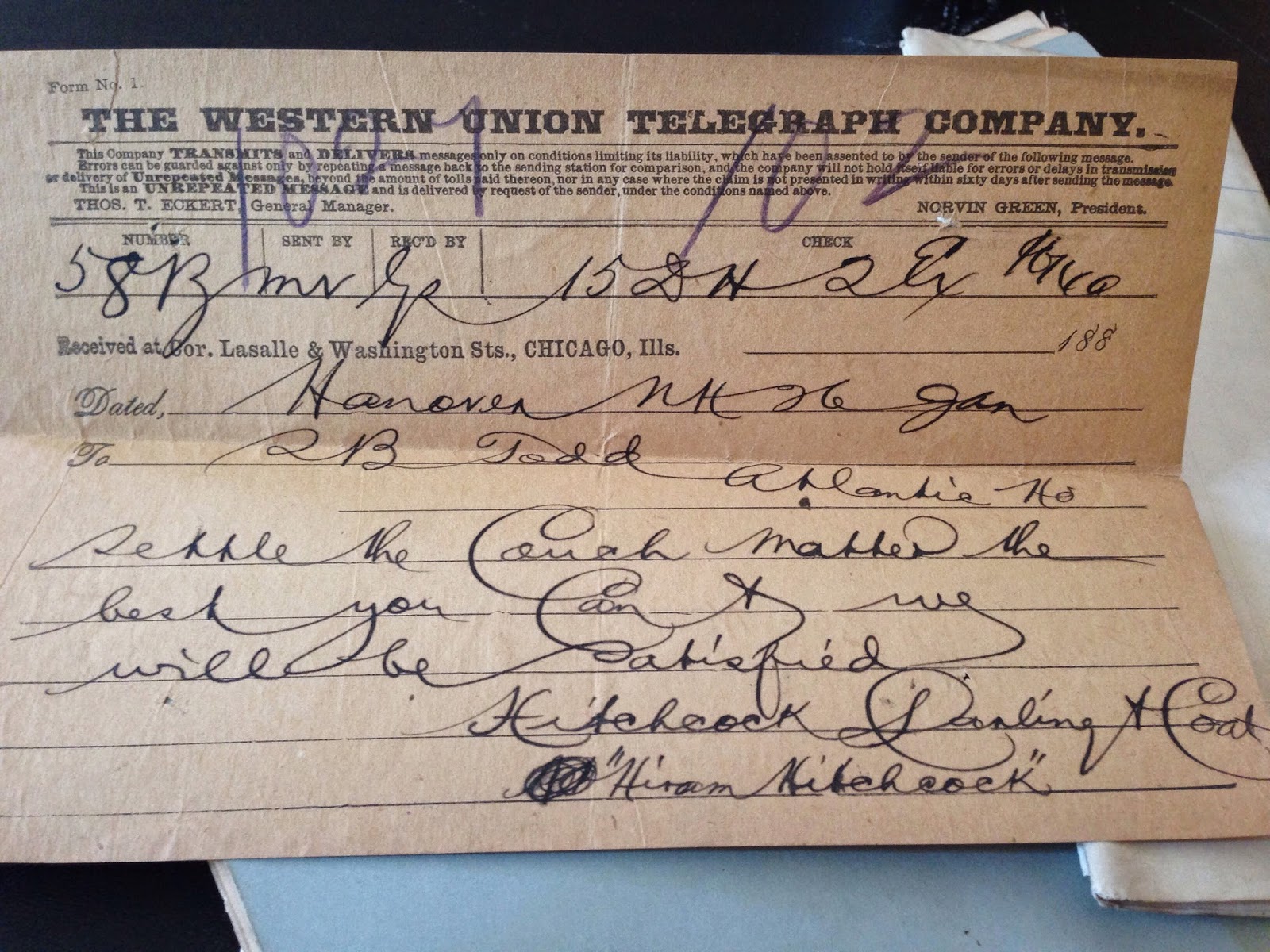 One of the telegrams from the 1870s and 80s, most of which relate to lawsuits over the Couch estate. 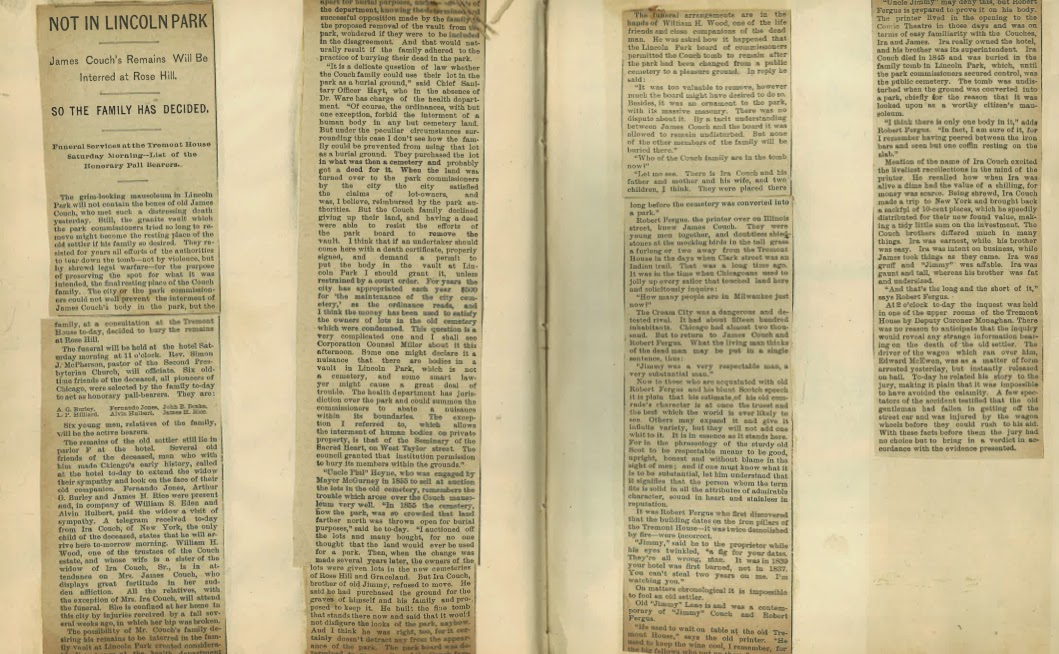 A large article from an unknown paper – I’ll have to hit to microfilm room to find out which paper this was from. It’s from some defunt paper from the second week of Feb, 1892, when James Couch died. This had a few new “eyewitness accounts” as to who was in the tomb, though some of the facts are pretty shaky – particularly the story that Ira had already built it prior to his death. The tomb was built in 1858, a year after he died. The fact that so much time elapsed (along with the fact that the body had to be transported from Cuba) support the theory that he might have been placed in a Fisk Metallic Burial Case, a really ornate metal coffin with a viewing window over the face. All the rage in the 1850s, bodies buried in them are still in decent shape about half the time. 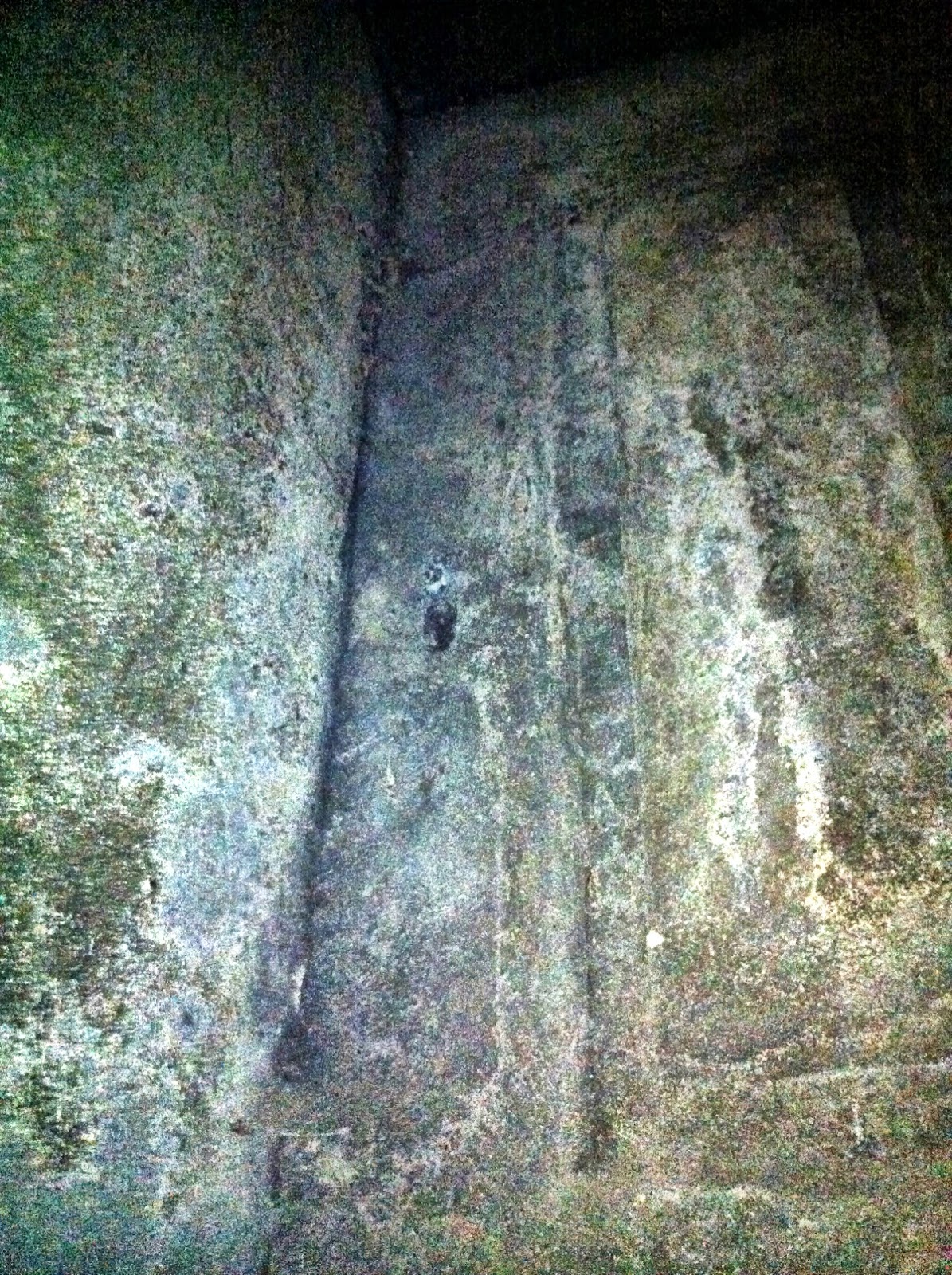 One of our “interior” shots of the tomb, showing the inside door. The guy who said he looked through the grate and saw one coffin must have been looking on a day when this door was open? Early articles about the construction of the tomb speak of a marble slab at the entrance behind the iron bars. Better pictures may be possible this fall….
(Visited 273 times, 1 visits today)