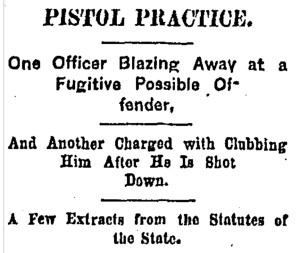 “The patrolmen of the city are entirely too reckless with their revolvers and clubs, and it is about time a stop was put to their shooting and brutality. They defy the law, and act on their own responsibility,but their superiors would seem to wink at the their crimes since it is useless to make complaint; they always manage to go scot free, unless the victim or his friends go over on the north side for justice.”

Sounds like a think piece from this past week, but that’s quote come from an issue of the Chicago Tribune published all the way back in 1879. While I don’t want to be the nine millionth person to weigh in on the events of the day (this is a history blog, after all), I did feel compelled to look up similar cases from the old days, and found quite a few. In the podcast, we look not only at what led the Tribune to make a statement like that in 1879, but a case in which an officer was nearly convicted after shooting a man in 1872, when the rubble of the Great Chicago Fire was still smoldering, and revisit a bit of the Buff Higgins case we blogged about last week.

Get the podcast on itunes!