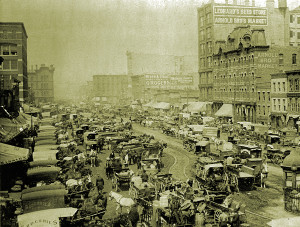 (new podcast! Click above, or see archive.org or iTunes
In 1888, a book of anecdotes about early Chicago retold a heck of a ghost story: one night on West Randolph, a woman heard ghostly footsteps up and down the stairs, then saw a disembodied hand shoving her apartment door shut. She ran away, then came back to find her baby in the oven (but alive), her dog dangling from a ribbon, and a bloody handprint on the door.

This story is a blast, because it seems like an embyronic version of a LOT of 20th century urban legends, like the old yarn about the babysitter putting the baby in the oven, and  the classic ghost story about “your dog isn’t the only one who can lick your hand,” not to mention the folklore motif of “the handprint that never faded away.”

We’ve had more than one “ghostly handprint” stories in Chicago over the years – in the podcast above we mention Frank Leavy’s hand, of which a photograph surfaced fairly recently .

With few details in the 1888 book, it took some elbow grease to find the original source of the story! A regional reprint of an 1866 issue of the Chicago Post was eventually located, and gave the original ghost story in far greater detail – the story originally had a few more characters, took place over the course of two nights, and had a lot more objects flying around the room. By 1888, the story had been conflated and pared down to its basic urban legend components.

The house, said to have been the sight of “many dark deeds,” was given in the 1866 article as 128 West Randolph, which would be 645 West Randolph in modern numbering (where the Fiat dearly is now, across the corner from the Haymarket monument – so close that it may be one of the four story buildings in the photograph of the intersection of Randolph and Des Plaines above). As far as dark deeds, all I could find was a story of adultery and threatened murder going on there a few months before the hauntings began.

All of the details are in the podcast!

One thought on “Podcast: The Bloody Handprint of West Randolph”