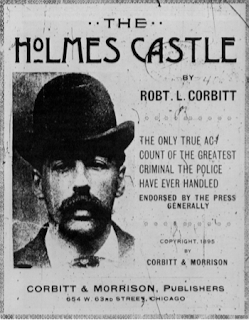 Time for a new podcast! You can download today’s episode from feedburner, archive.org,  or iTunes.

Today, we’re back at Graceland Cemetery, searching for the grave of a deranged Victorian private detective. My job is pretty sweet.

I’ve lately been back working on the HH Holmes case, trying to gather, evaluate, and catalog all of the best data available. Researchers into the case will often come across the name Robert Corbitt (or Corbett), author of The Holmes Castle, possibly the first book on Holmes. He pushed the odd theory that Holmes was actually innocent of murder.  One does notice a pattern in article on him: one day he’ll be saying he’s found the evidence that will convict Holmes, then something bad will happen to him, then he’ll be saying Holmes was innocent. The book is very rare now, but the text is collected in The Strange Case of Dr. H.H. Holmes

Plenty of evidence suggests that he was a bit on the paranoid side, at the very least. He spoke to reporters often saying he knew that various Holmes victims had checked into various hotels under assumed names, or that he’d seen them on the street, but was never really able to back his claims up. Records and stories of him don’t paint much of a flattering picture.

However, whatever his shortcomings as a private detective may be, had was actually present at the “murder castle” investigation, may have known Holmes personally (they certainly exchanged letters), and wound up in possession of a LOT of Holmes data that modern researchers can only dream of (letters, account books…even Holmes’ own pistol and knife!) He is also the guy who discovered the “glass bending factory” that we’ve come to know as “The Body Dump.”

Anyway, Ray Johnson and I have been preparing an article on Corbitt, and found that he’d died in 1932 and the body was taken to Graceland cemetery. So on this cold December day, we headed up to the ol’ graveyard in search of his grave. Along the way, we say several graves of people related to the Holmes case, including detective Allan Pinkerton, and discussed the cool stuff we saw along the way.  Ray and I will be recording a couple of podcasts about how we do this sort of research, including trips the archives, cemeteries, and more.  We hope to have a few new episodes up very soon!  Get Ray’s book, Chicago’s Haunt Detective.

Again, you can download today’s episode from feedburner, archive.org,  or iTunes  (the episode may take a few hours to get to iTunes).
Or just listen right here:
And if you’re not sick of me, I also recently did a podcast interview for Your Chicago that was a lot of fun:

3 thoughts on “Podcast: The Detective’s Grave”