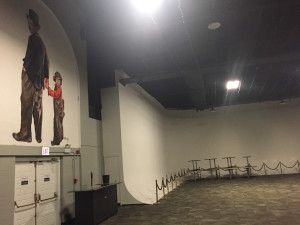 Longtime readers might remember five years ago, when this was the Chicago Unbelievable blog, and we explored the old Essanay silent film studios on a podcast. Essaany was a silent film studio here in Chicago, and for about ten years starting in 1907, it was one of the biggest in the world.  The old studio was a pretty bare space in 2011, just an large empty room on the St. Augustine College campus, but if you knew that it was once a film studio, you could see that it was largely still intact.

For one thing, I wrote a book about silent film in Chicago, called Flickering Empire: How Chicago Invented the US Film Industry. It came out in early 2015 through Wallflower, University of Columbia press’s film studies imprint. Co-author Michael Glover Smith and I will be giving a talk at the Bezazian branch of the Chicago Public Library on Saturday, March 12, at 3:30.  From there, you may wish to stick around in Uptown for a really cool event taking place right around the block.

St. Augustine College has fixed up the old Essanay studio stage into The Charlie Chaplin Auditorium (see pic above). It was named in honor of Chaplin’s brief tenure here; he made one film, His New Job, in the studio in early 1915. It’s a terrific space, and still remarkably intact from the old days, all things considered. One look and you can easily imagine it as a film studio – I always want to call it a “soundstage,” but that isn’t quite accurate, since they didn’t have sound. Here, they cranked out hundreds of movies in the early days of the US film industry. Gloria Swanson got her start here. Ben Turpin used to borrow flowers from the nearby cemetery to use as props. Francis X. Bushman drove to work in a purple limousine with a spotlight on the dashboard so everyone could see him. Charlie Chaplin crashed on Broncho Billy Anderson’s couch. It’s exciting now just to stand in the space – a major piece of film history hiding away in Uptown.

For the record, the Chaplin image on the wall is from The Kid, which was no filmed here. Fun fact, though: that kid standing with him in the painting grew up to be Uncle Fester on The Addams Family.  If you know the space, it’s fascinating to watch the handful of surviving movies that were filmed there and see all the pipes and doors that are still visible.

Wanna check out the space yourself? I’ll be hosting a really cool event there at 7pm on Saturday March 12, after the library talk, bringing Essanay back into the movie industry after nearly a century:

SHERLOCK HOLMES: BACK AT HOME

Though the vast majority of Essanay films are now long gone, and when we started the book, one of the most important missing ones was Sherlock Holmes, the 1916 film that was the first movie ever made about the famous sleuth. It starred William Gillette, who’d been playing the role onstage since 1899, and was the only film he ever made.  Anecdotes at the time said that he thought that Chicago had enough was the only city that felt enough like Victorian london to make the movie here. The Chicago Examiner of the day said the film was “seven reels that seem but five,” and the Tribune said “It is a production to which Essanay may point with pride and may file away in a strong box for future and again future revival. For it is a perservative of the Gillette personality.” But they didn’t file it away; it was lost, along with any other record of Gilette’s acting chops.

But one of the fun things about studying silent film is that no film is necessarily lost forever – you never know when a copy might turn up in a barn or a yard sale someplace. And in this case, someone found a print of Sherlock Holmes in a vault in France. It’s now been fully restored!

Just in time for the 100th anniversary, I’m teaming up with Atlas Obscura to host a screening of it  right in the studio stage where it was originally filmed! We’ve rented out the old Essanay Studios for March 12, 2016, and we’ll be showing the film accompanied by a live piano/cello duo. Come in costume, enjoy treats from Popcorn Alley. Knife&Tine will be onhand to run a cash bar with specially-created Sherlock Themed cocktails, including “A Study in Scarlet,” “A Three Pipe Problem,” and “The Five Orange Pips.” We’re going back in time for an incredible night you won’t forget in the very historic space where the movie was filmed. For Sherlockians, silent film buffs, history fans, and, really anyone, this is a once-in-a-lifetime opportunity for the kind of film screening you’ll remember forever.  GET YOUR TICKETS HERE WHILE THEY LAST! I’ll be on hand to give a short talk about Essanay and show a couple of rare shorts before the feature presentation.

Hear me and mixologist Nikki Allen talking about it on WGN here – we come in at about 55 minutes.

One thought on “Resurrecting Essanay, the Silent Film Studio in Uptown”