The great scavenger hunt (or wild goose chase) for the true identity of Resurrection Mary, Chicago’s famous vanishing hitchhiker, continues. Just to re-iterate, what we’re looking for here is a woman, roughly in her late teens, and probably a blonde named Mary, who died circa the 1920s or 30s and was buried at Resurrection Cemetery, most likely after dying in a car wreck, preferably on Archer Avenue. We can be sort of flexible on a number of these, partly because no one has yet been found who meets ALL of these criteria. The closest match is probably Mary Miskowsi, but stories of her death in 1930 have not yet been verified (no record or contemporary news account has been found, though census forms indicate that she was a real person).

Here’s a new entrant into the field that I ran across while doing some research this morning: Mrs. Mary Bojacz, who died in 1921 in a tragic accident that claimed 11 victims, many of who were en route to burial service at Resurrection Cemetery. 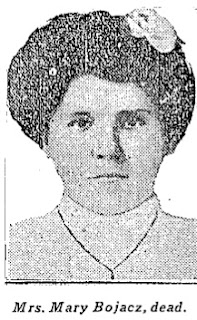 She’s not blonde, and there’s really no telling how old she is. The newspaper reports did not list her age, and I can’t find any other record of her yet (most likely, Bojacz was not the correct spelling of the name). All we really know about her is that she was married and lived 2658 West 25th Place. This doesn’t necessarily mean she’s too old to be the ghost, though; one other candidate was a 17 year old bride. She may not have been buried at Resurrection, though the fact that she was going there at the time of her death is an interesting twist.

The accident that claimed her life was one of the most tragic I’ve seen. Two cars were headed to Resurrection Cemetery, and the car in the back didn’t see the California Limited train coming down the Santa De line as it crossed over an unguarded track at 50 miles an hour. Bodies were mangled, and parts of them, including several heads, ended up scattered as far as a mile away down the railroad tracks.  All of this happened so quickly that the the front car made it all the way to the cemetery before it realized that the car behind it was no longer following it. 11 people from the funeral party, including the undertaker, were killed, and three others were injured so badly that their deaths were expected at the time the article was published.  Another man was killed in another train-crossing accident that same day.

Mrs. Bojacz doesn’t meet all the requirements for Mary – she’s probably too old, and certainly wasn’t a blond, but nearly any Mary killed in a tragic wreck who can be associated with Resurrection qualifies as a fringe candidate. Click the “Resurrection Mary” label below for more information on the other candidates, including Anna Norkus, Mary Bregovy (who is also not a blonde) and others. I’ll update this posting when we get a better idea of Mary B’s age.

For a whole lot more information, check out our Resurrection Mary Roundtable podcast!