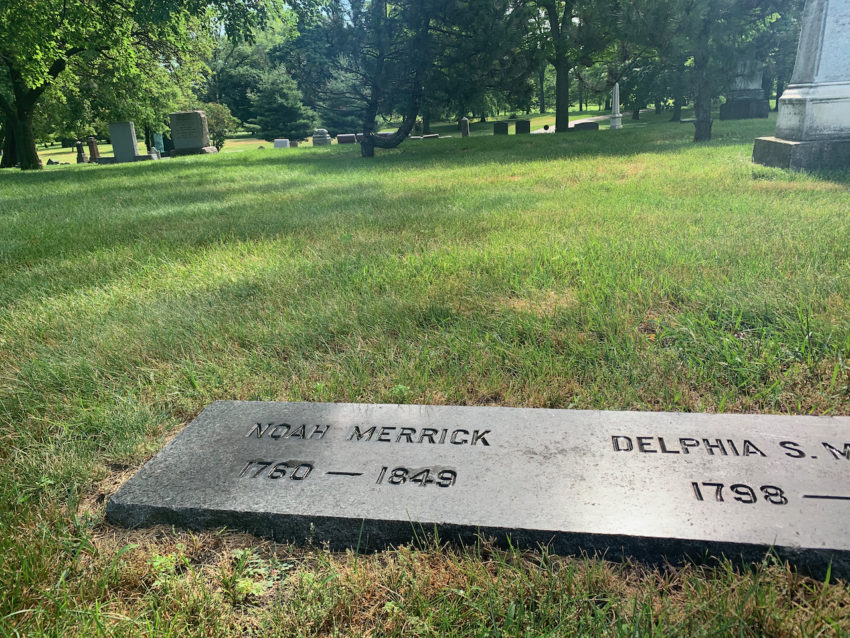 Lists of military graves in Chicago tend to list two Revolutionary War vets – but neither are verifiable. In fact, they’re quite dubious.

Lincoln Park hosts a memorial boulder to David Kennison, who claimed to be a 115 year old veteran of the Boston Tea Party. A note in his pension file says not to listen to a word he says; he started lying about his age around the time of his service in the War of 1812 (but he did use his fictional status as a Revolutionary vet to argue against slavery, so at least he used his powers as a con man for good).

At Rosehill Cemetery is a marker for William Du Vol, but nothing about Du Vol can be verified. There’s no known year of birth or death, and no records that can be connected to him. A previous headstone, recently replaced called him a “Soldier of the Revolution,” but didn’t say which revolution, and no records can have been attached to him.

But in researching a new “Who’s Who” book for Graceland Cemetery, I stumbled upon a Revolutionary War vet who somehow escaped the notice of E.R. Lewis, who compiled a list of veteran burials, The Roll of Honor, published by the Board of Commissioners in 1922. And Noah Merrick (1760-1849) is not only verifiable, he’s a very “Second City” sort of Revolutionary soldier to have.

Noah Merrick was born in Monson, Mass in 1760. In July, 1779, he volunteered for a six week enlistment in Colonel Elisha Porter’s regiment, traveling 65 miles from home to serve under Captain Joshua Shaw in New London, Connecticut. This new regiment didn’t do anything that anyone cared to write down before being mustered out on August 27. Noah was home by September. His service had lasted one month and nine days.

Back at home, Noah got married and had three children; when his wife died he married a widow, Eunice Clark Shepard, who was busy with three kids of her own, and the crew somehow formed a family. After Eunice died some years later, Noah married one of her daughters, Delphia. Noah was 64, and Delphia was 26. They had two sons. (They were also Delphia’s stepbrothers, in a way – there’s a bit of an “I’m my own Grandpa” thing going on here).

Age differences of this sort weren’t terribly uncommon then, and at least Delphia wasn’t 15 or anything, but there may have been gossiping neighbors when Noah married a woman who had recently been his teenage stepdaughter. Perhaps to escape scrutiny, or perhaps merely from a desire to go west, they eventually packed up and moved to Chemung, Illinois, near the Wisconsin border, where Noah died of an apoplectic fit around 1849 (sources differ on the exact year). He was buried in what Graceland records simply call “a country cemetery,” and Delphia and her now-grown sons moved to Chicago.

Noah’s pension file is pretty comprehensive, partly because of Delphia’s quest to get a revolutionary widow’s pension (in which she was aided by attorney L.F. Bingham, who had also helped Delphia’s Graceland neighbor Amy Gridley get one. ) Authorities were able to verify Noah’s service – but not Delphia’s marriage to him, as it was never legally recorded (one can just imagine a justice of the peace saying “Dude, no!” when Noah came in with his stepdaughter). Delphia died in 1864, and Noah was disinterred to be buried beside her in the Graceland lot his son, Civil War Major Charles Merrick, purchased. A daughter-in-law added the simple marker in 1917, but didn’t mention his service. The initial burial outside McHenry is probably why he escaped E.R. Lewis’s notice.

Noah may have served more than just the one enlistment; his pension file contains a letter from his son saying that his father had served the whole length of the war, and that he’d had a full list of his wartime service up until the time of the Great Chicago Fire. However, it’s more likely that Noah simply told his children (who, technically, just saying, were also his grandchildren) exaggerated stories, assuming that they’d never know the truth. It had all happened twenty years before Delphia was even born, after all.

The marker isn’t too hard to find – if you take a right upon entering Graceland, then walk left into the grounds when you get to the art deco cross for Philo Otis Adams, the black marker is flush to the ground several feet back. It’s on top of the hill behind the Kinzie plot. In the picture above, you can see the famous Eternal Silence statue in the background. I can’t imagine I’m the first person to notice this, but I couldn’t find a thing about it when I was looking him up in 2018 (I’d initially planned to wait until there was pre-order info on the book, but as the date keeps changing I decided to just post it).

I find the whole story rather charming, in a way. We finally have a verified Revolutionary War soldier in Chicago (besides two doubtful identifications and a couple of guys buried out in the suburbs), but so far as anyone can tell he spent his whole enlistment drinking beer and singing “Yankee Doodle,” then came home to…well, you know. As I said, he’s a very “Second City” sort of Revolutionary War vet to have. But it’s true that when his country called, he answered. And it was an awfully long commute.

Perhaps I’m being too flippant, but if I can’t rip on a guy who marries his stepdaughter, well, what was he fighting for?