Yesterday was another fun day in the archives, going through old lawsuits. I was hoping that one of the records I pulled might help shed some light on the Foolkiller Submarine, but it was a bust.

The find of the day was an HH Holmes lawsuit with a couple of nifty pieces of paperwork that may include his actual signature, including this promissory note from the Bank of Englewood, co-signed by his mother-in-law (whose signature was quite possibly forged). Holmes, of course, was the multi-murderer and master swindler who built a “murder castle” in Englewood – researching him may be the biggest rabbit-hole in town. 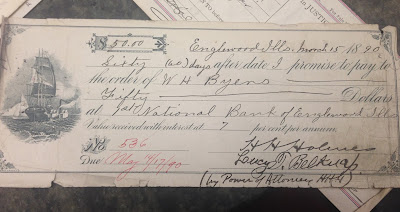 The lawsuit here was in regards to this note; Holmes offered to pay the guy back $50.00 plus interest for money lent to him in 1890. He never did pay it back, though. Hence the suit.
This is one of the real small-potatoes suits, really. Others I saw yesterday dealt with the furniture Holmes bought on credit and never paid for (it was hidden in the “secret hanging chamber” of the castle when the company tried to repossess it), and a lumber company from whom he bought several thousand feet of yellow pine for reasons unclear. Most of these don’t contain much of interest, other than a new address or two to add to my “Where Was Holmes” map and some samples of attorney Wharton Plummer’s handwriting. I love Wharton Plummer; he was kind of a dumbass. Never did figure out that HH Holmes and HS Campbell were the same guy.
I just recently digitized several such suits, including one in which Dr. Maurice Lawrence, who lived in the “castle,” tried to sue Holmes for repayment of the three thousand bucks he’d loaned him to convert the building into a “World’s Fair Hotel.” Some of the paperwork for that one is included in the expanded version of the book linked below, as well as a terrific Wharton Plummer interview in which he claims that the stories about the castle are “%^&*ing rot.”   (Well, the reporter said “he qualified the last word (rot) with an adjective in common use.” Ah, Victorian reporters!)

Murder Castle: Expanded, Full-Length Edition
Diagrams, drawings, eyewitness accounts
Just 3.99 on Kindle
Don’t have a kindle? No problem! Just get
a FREE Kindle App for Your Smartphone, Tablet, or PC!