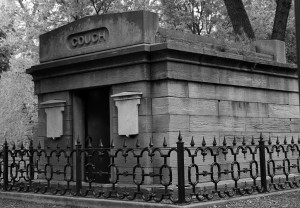 The “Couch Tomb” in Lincoln Park absolutely haunts me. I have dreams about going inside of the thing all the time (in my dreams it’s usually bigger on the inside). Newly discovered info is making it even MORE intriguing. In a recent post, we noted that Ira J. Couch, grandson of Ira, the man for whom the tomb was built, said in 1911 that two of his brothers were in the tomb.

Now, this was sort of a shocker, since all available evidence was that Ira J. Couch didn’t have any brothers.  However, newly discovered info in his grandmother’s probate files have him giving sworn testimony that his parents had two stillborn babies who died unnamed. He also indicated that his grandparents (Ira himself and Caroline) had three such unnamed children in addition to Caroline, their only known child.

This isn’t necessarily a smoking gun – those babies would both have been born well past the age when it was actually legal to inter bodies in what was, by then, Lincoln Park, and Ira was probably not old enough to remember the only one of these that was born in his lifetime.  However, between Ira J’s comments and some gossip in newspapers of the day, I do tend to get the impression that the city and the family had different concepts of what could legally be done with the old crypt, so for there to be two stillborn babies in the tomb is not fully out of the question.

And here’s something new for me: I recently located a copy of Caroline Couch-Johnson’s death certificate. Caroline was Ira J’s mother, and Ira-of-the-tomb’s daughter (and, yes, the number of people named Ira and Caroline in this saga can make things a bit confusing). As expected, the death certificate indicated that she was buried in Rose Hill, where the Couches were being interred by the time of her death in 1885, at which point her mother was still alive.

But there was one thing I was shocked to see: the birth certificate mentioned that she was born in the Tremont House, the hotel that her father owned:

It’s awfully unusual to see things like this on a death certificate; they seldom make any comment unless there’s something to note about the cause of death, like when the specify that it was a death by legal execution, or a drowning in Maple Lake, or if the gun-shot that killed the person was an accident or suicide.  Most of them are very matter-of-fact, and I’ve never seen a detail like this added into the birth information. Neat!
However, Caroline and her mother (Ira’s wife) are both certainly at Rose Hill, not in the old tomb. Her mother’s probate file contained some interesting info, like the itemized receipt for her funeral, which indicated that she was buried in an $80 coffin – very nice by the standards of the day.
My upcoming Ghosts of Chicago book that Llewellyn will put out this Fall will have a section on the tomb and the occasional bits of ghostlore that have sprung up around it, as well as a photo or two of what’s behind the door (don’t get too excited – it gets us no closer to solving the mystery!)  Pamela Bannos, author of the Hidden Truths website about City Cemetery, is preparing a book, as well, which I can’t wait to see!
(Visited 148 times, 1 visits today)