In my process of researching a book on Abe Lincoln ghostlore, I’ve dug up lots of fun Civil War stuff. While watching the drama unfolding in Texas on June 25-6, which left me just a few hours of sleep before watching the Supreme Court’s gay marriage rulings, I kept getting “The Battle Cry of Freedom” stuck in my head.

Something told me that was a Chicago song, and a brief look confirmed that the author, George F Root, was working for his brother’s firm, Root and Cody, in Chicago when he wrote it. Root and Cody’s office was in the Larmon Block, 95 N Clark, on the NE corner of Clark and Washington, facing the court house square. They wrote a LOT of great, rousing war songs (many of which contain language that fly  in the face of the notion that no one thought of it as a war about slavery in the 1860s – it’s hard to read anything from the 1860s without it seeming blindingly obvious that it was well understood as a slavery war on both sides, even before ending slavery was a formal goal on the Union side).

“Battle Cry of Freedom” was one of the most popular recruiting songs of the war: 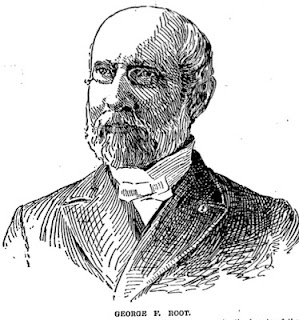 Not long after, flush with cash from the sheet music to the song selling hundreds of thousands of copies, Root and Cady offered to buy the original copy of the Emancipation Proclamation for $2100.00. It’s mentioned as being a crowd-pleaser in accounts of several similar Chicago rallies.

Of course, like absolutely ANYTHING to do with the Civil War, there’s some question as to whether this is exactly right; some doubt that this was really the premiere of the song. In 1888, The Record, a magazine printed some reminisces of ne Richard Wentworth Browne, who quoted a confederate soldier (sometimes said to be a major, though he’s never named in the article), saying “I shall never forget the first time I heard ‘Rally ‘Rond the Flag.’ It was a nasty night during the Seven Days Fight (in Richmond, VA, 1862), and, if I remember rightly, it was raining. I was on picket, when, just before ‘Taps,’ some fellow on the other side struck up that song, and others joined in the chorus, until it seemed to me the whole Yankee army was singing.  Tom B—, who was with me, sung out ‘Good heavens, Cap. What are those fellows made of, anyway? Here we’ve licked ’em six days running, and now, on the eve of the sevenh, they  are singing ‘Rally Round the Flag.’ I am not naturally superstitious, but I tell you that song sound to me like the ‘knell of doom,’ and my heart went down into my boots, and though I’ve tried to do my duty, it has been an up-hil fight with me ever since.” If the date was right, this would have been around June 30 or July 1 of 1862, a few weeks before the Chicago rally.

As a historian, given the vague sources, I’m not convinced by the account of the song being sung at the Seven Days Battle – it’s an account from an unnamed source a quarter of a century later, with no witness to corraborate (though, from the sound of it, there should have been several), and that keeps me thinking that the sung first cut through the air in Chicago, near the present site of city hall, and in front of the very building where Lincoln would lie in state a few years later as the war wound to a close.

Root wrote many other songs – “Tramp Tramp Tramp” is mostly forgotten now, but hugely successful during the war. Same with “Just Before The Battle Mother,” which shows up on a lot of “Songs of the Civil War” compilations (though it’s probably better known by now as the melody to Woody Guthrie’s “Hobo’s Lullaby”). Around the time of Lincoln’s funeral, the Trib predicted that a new Root song, “Starved in Prison,” would become just as popular as “Battle Cry of Freedom.” The chorus went:

Yes! They starved in pens and prisons
helpless, friendless and alone
and their woe can ne’er be spoken
nor their agony be known.

Maybe it’s just that it didn’t have three years of wartime to pick up speed, but this number (which must have been all KINDS of rousing) never quite caught on.

Trivia: Another worker at the firm (who one day knocked on the door with a song he’d written) was Henry Clay Work, who wrote “Marching Through Georgia,” “My Grandfather’s Clock” (which was so popular that we started calling all large upright clocks Grandfather clocks) and “Come Home, Dear Father,” which is about a girl singing to her dad, who is too busy drinking to notice that his son is dying. Par-tay!