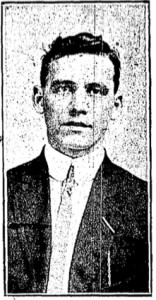 Henry “Hoops-a-Daisy” Connors is not one of Chicago’s better-known gangsters. In fact, if he didn’t have such a swell nickname, I doubt any attention would have been paid to him at all. It hasn’t, really. Looking him up now, all I’m seeing about him are vintage newspapers and one mention in one of my own books.

Hoops-a-Daisy was born around Erie and Wells back when the neighborhood was known as “Smoky Hollow” and grew up to be a gangster. In 1914, according to police records reported in the Tribune, he shot and killed a man he said he hurt his sister. He did some time for counterfeiting in Toledo, and in 1928 he took a gun away from a bartender and shot him with it.

By 1929, he was known as a political hanger-on, switching sides among various aldermen and aldermanic candidates in the 42nd Ward, where he had been trying to open dives of his own while living in a room at the Wacker Hotel (now the Felix). On September 1, 1929, he came into the C and O Restaurant looking for trouble.

The C and O Restaurant and Cabaret, 509 N. Clark, was a hangout both for gangsters and politicians – there was a lunch room up front, a cabaret in the back, and, off and on, a casino in the basement. Booze seems to have flowed pretty freely, even though prohibition was in full effect. Though not one of the better known gang hangouts today (it’s overshadowed by places whose gang history is wildly exaggerated), it sure as hell seems to have been a tough place in its day. It’s even been suggested that the St. Valentine’s Day Massacre was not really a Capone job, but revenge for the killing of William Davern in the C&O in 1929  (though the real killer in that version of events was in jail at the time, so most historians tend to brush it off).

Months after the massacre, a drunken Hoops-a-Daisy walked into the C&O and approached a table occupied by James McManus and Ernest Fontana, a pair of north side gangsters.  According to the Evening Journal, McManus later said “Connors came up to our table, evidently intoxicated, and said ‘Come n in the back and I’ll give you a drink. We refused, saying we were busy.”

The two were apparently old pals of his from when he supported Dorsey Crowe as alderman, but had quarreled with him since he switched his allegiance for Crowe’s opponent. Going into the back with him seemed like a bad idea.

“Then Connors pulled a gun and swore,” McManus went on, “ordering us to get into the back room. That’s when the shooting started.”

Connors stood  on the step that separated the lunch room from the cabaret, swearing and pointing people around with his pistol. As he did, someone standing behind him opened fire. When the police arrived, Connors was lying dead across the dividing line between the lunch room and the cabaret, having been shot in the back, the eye, and the groin. There were many witnesses, including a couple of cabaret singers, a musician, a waiter, and several customers, but none claimed to have seen the killer.

McManus and Fontana were said to have blamed Conners for the recent killing of John E. Bowman, and it was speculated that he had come to the C&O to kill them for daring to think such a thing (or perhaps for knowing too much). In the coming weeks, several other gang killing would be connected to the Connors killing: less than two weeks later, a carnival barker and 42nd ward political hanger-on named Charles Brown was “taken for a ride” and thrown out of a car to die of his wounds at 53rd and Lowe.  Some said Brown was an informer for prohibition agents, others said it was all a gambling fight, but police theorized it may have been retaliation for Connors’ killing.

The next month, George Riggins, a friend of the slain Bowman, was in his gambling house near Madison and Racine when six gangsters came in. They robbed 30 dice players, then put Riggins against the wall, cussed him out, then shot him nine times. Police speculated that this was revenge for the Connors killing, as well.

Whether these killings were really connected to Connors will likely never really be known, and neither will the identity of his killer. Like the story behind his fantastic nickname, they’ll probably remain mysteries for all time.