No, this isn’t one of those “occupy” posts. But there’s one bank on North Clark that seems to have demons carved right into the facade – at 2021 N Clark. Would you go to a bank with demons on it? 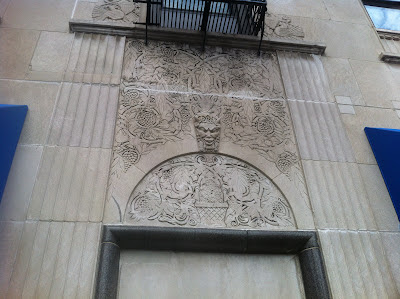 Up close, you see that the thing actually has horns and everything. Is this supposed to be the devil? Does this mean I can sell my soul at this bank? Finally, a way to get a mortgage! 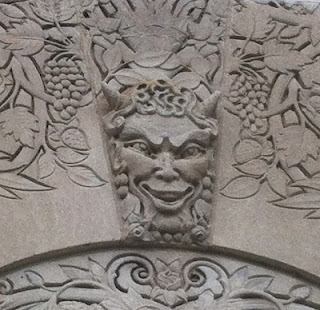 I’d say it’s actually more likely Pan, the greek god, than Satan, but I’d really love to find out what was going through people’s heads when the place was built, back in 1935. I’m not sure there was a bank in the space then (there has been since at least the 1970s), but 1935 was exactly the time period when a builder could probably get away with putting a demon on a bank and acting all coy about it. People would take his side. Look how many took John Dillinger’s side for robbing the banks (this is about half a mile, give or take a few blocks, from the Biograph Theatre, where he saw his last movie before being shot in the nearby alley).  Of course, putting Pan on a bank doesn’t make a WHOLE lot more sense than putting Satan on one.

The building is actually mainly residential; most of it is a high rise: 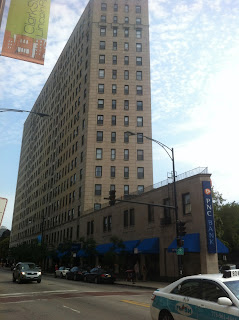 The main residential entrance is on the other side of the building, on North Lincoln Park, and is kind of creepy itself (and I mean that in the nicest possible way). 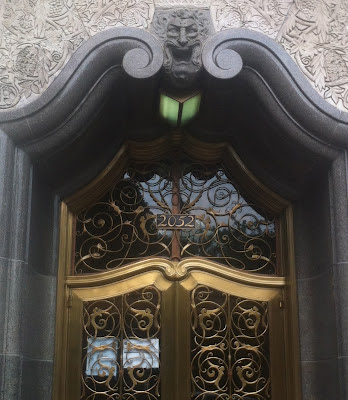 Anyone know more about this place? The fire insurance map from the year it was built is sort of unreadable.

3 thoughts on “The “Demon Bank” on North Clark”