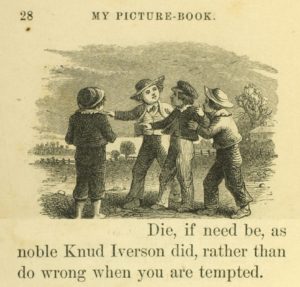 Listen to the podcast above, on archive.org, or iTunes

In 1853, a story spread that little Knud Iverson, a young Chicago boy, had been ordered by older, “wicked” boys to steal some fruit from Daniel Elston’s orchard, which stood on the banks of the river where Elston’s namesake street now crosses Division. If he didn’t, they said, they’d dunk him in the river. Knud refused to steal, so they dunked him, just as they’d promised, and he drowned.

In some versions of the story they specifically told him they’d drown him if he refused to steal from Old Man Elston, and he’d chosen death over wickedness. A local minister began promoting him as a “martyr,” and started raising funds for a monument. The story spread all over the country, and donations poured in. P.T. Barnum sent $200. Years later, people could still remember when their Sunday School had taken up a collection for the Iverson monument.  The story of little Knud was written into childrens’ morality books and sermons for years – invariably praising his decision to die rather than steal. Personally, I’d counsel kids to just steal the apples and make it up to Mr. Elston later. This isn’t the kind of thing to die over.

In some wilder versions of the story, it was even suggested that, since the “wicked boys” were never identified (the only witness was a German boy who didn’t know them very well), that one or more of them was really one of the devil’s imps, or the devil himself, hanging around the Elston Orchard leading boys into temptation. There is now a nightclub on that spot; it’s probably worth considering that it’s been pointed out as the devil’s domain!

But the Chicago Tribune got ahold of the coroner’s jury’s verdict. The jury, led by Elston himself, had ruled that the death was not a murder. Boys had been horsing around in the river, dunking one another, as they often did, and Iverson’s drowning had simply been an accident, not a case of martrydom. The whole thing, the Tribune alleged, had been a “pious hoax” perpetrated by a local minister to build publicity – and money – for himself. It was suggested that the money raised for a monument be returned to the donors, but there were several articles over the years suggesting that no one was entirely sure what had happened to it.

The story continued to get cloudy – Elston himself was said to have written to the Chicago Democratic Press saying that, while the evidence before the jury didn’t prove it was a murder, he personally believed that it was based on new information he’d received since  (update: I checked the microfilm for the Democratic Press, and while there were many letters insisting that it really was a murder, none came from Mr. Elston. All were just people speculating). Soon, everyone had picked sides – some said that it was proof that Chicago had a real problem with juvenile delinquents, and others said it was proof that Chicago was a great place for humbugs. Even before the verdict, a few papers had made cracks about it being hard to believe that a Chicago boy wouldn’t steal, or that it was just like Chicago to kill anyone who wasn’t a thief.

Knud was probably buried in the old City Cemetery, where Lincoln Park is now. If he was moved, it wasn’t recorded, but some 1870s articles mention that there was a monument to him paid for by William Bross, who published the Democratic Press in 1853, and who is buried at Rosehill. It could be that there’s some monument to Knud that was placed in City Cemetery and moved to Rosehill, where it’s now one of those illegible markers and lost to history, but it’s perhaps more likely that he’s still in an unmarked spot in what is now Lincoln Park.

Elston himself died of typhoid fever in 1855; his body was moved to Graceland in 1867.

2 thoughts on “The Devil and Daniel Elston”